Recapping the 13th Moose game of the season. 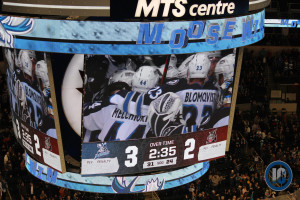 After losing a tough game on Thursday to these same Chicago Wolves – a team which came into the game with a record of 8-1-1 – the Moose were eager to get back in the win column and get their first home win.

10 minutes into the game, Scott Komachuk threw an innocent shot at the net from a bad angle, and managed to squeak it by Phoenix Copley to put the Moose up 1-0.

After Patrice Cormier took a boarding penalty, Ty Rattie scored on a shot from the left circle, which careened off Andrew McWilliam and went five-hole on Eric Comrie. The game was tied 1-1 after the first.

In the late stages of the second, sniper Danny Kristo walked in and took a wicked shot from the left face-off dot – basically the exactly same spot as Rattie – and put it top-right corner to put the Wolves up 2-1.

With the Moose down 2-1 halfway through the third, Jiri Fronk picked up the puck at the side of the net, slipped past a defender, and made a strong move to the front of the net. He surprised everyone – including the goaltender, and managed to tie the game at 2.

In the very late stages of the third, Josh Morrissey fanned on a shot in the offensive zone, sending the play back down ice, which led to a Patrice Cormier interference penalty with 1:26 to play. The rink held its collective breath.

On the ensuing penalty kill Eric Comrie came up with a gigantic, game-saving stop – in trying to clear the puck out of danger, Andrew MacWilliam inadvertently put it right on the stick of a Wolves player, but Comrie reacted instantly with and made a tremendous glove save.

Early in OT, Kichton managed to slip behind everyone and took a feed from J.C Lipon – one-on-one with Copley, he wasn’t able to sneak it by the outstretched pad.

Just over two minutes into overtime, Josh Morrissey spotted a wide open Joel Armia skulking around the Wolves’ blueline. Armia took the stretch pass, went in all alone, and ended the game 2:25 into OT with a perfect shot to the low glove side. The crowd roared its approval and the Moose got their first home win. 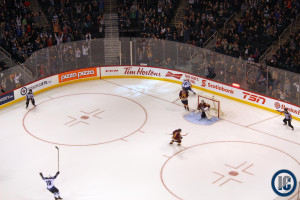 Jiri Fronk – He scored the tying goal again tonight on a great individual effort. The rookie now has goals in two straight games, and 3 points in 5 games – this after being scratched for 8 of the team’s first 13 games.

Joel Armia – Before he ended the game on the breakaway in OT, Armia had a whale of a third period. He looked very dangerous, using his skill and long reach to threaten defenders off the rush, and his size to drive to the net.

Scott Kosmachuk – After scoring his second of the year, Kosmachuk seemed to play with a renewed confidence; he was far more noticeable on the ice, and more assertive with the puck.

Defenceman Jan Kostalek returned after missing the past three games

Forwards Thomas Raffl and Jimmy Lodge are both day-to-day