Recapping the twelfth Moose game of the season. 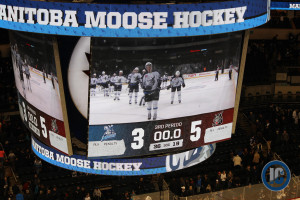 Returning home after a 5-game road trip, the Moose came into the game with a 2-7-1-1 record, sitting second last in their division. They faced the Chicago Wolves – farm club of the St. Louis Blues – and were looking to start evening the score after losing their first two meetings with the Wolves, 3-1 and 2-0, just a few short weeks ago.

The Wolves got on the scoresheet first, with Evan Trupp beating Connor Hellebuyck from a tough angle. The Moose were able to tie the game four minutes later on a beautiful passing play – J.C Lipon crossed the blue line, passed it to Armia, who went cross-ice to a streaking Chase de Leo who tipped it passed Jordan Binnington. (de Leo’s first professional goal). However, the Wolves took back the lead when Petteri Lindbohm beat Hellebuyck on a blast from the point with just a minute to play in the first. After one, the Moose led 13-8 in shots, but were down 2-1.

Play was slow through the first half of the period, until Patrice Cormier took a feed from Brenden Kichton and went in all alone on Binnington, making a great forehand deke to tie the game at 2. But with just two minutes left in the second, Peter Harrold came down the right hand side and made a perfect cross-ice feed to Jeremy Welsch who tipped it past Hellebuyck to put the Wolves back up by 1. Despite being up 23-12 in shots  – a rarity for the Moose this season – they found themselves down 3-2 after two.

Just 1:36 into the 3rd, Jiri Fronk picked up a loose puck and skated in clear from his own blueline – he made a great deke (essentially the same one as Cormier, but right-handed), and slid it in beautifully on his forehand to knot the game at three. A few minutes later, Matt Halischuk made a great feed to set up Cormier in the slot, but he was stoned in front of the net. Then with 10 minutes left to play, Connor Hellebuyck made a huge stop on a breakaway, and was down for a few moments after an opposing player collided with his head. (He was ok). A few minutes later, a nice passing play by the Wolves led to a chance from the danger area in the slot – Hellebuyck stopped the initial shot, but kicked out the rebound to a salivating Ivan Barbashev, who put it home to restore the Wolves to their 1-goal lead. A minute later, Peter Stoykewych took a tripping penalty, and the Wolves capitalized on the pp, with Welsch sniping his second of the night. The Moose generated some chances on a late powerplay , but ultimately fell, 5-3. 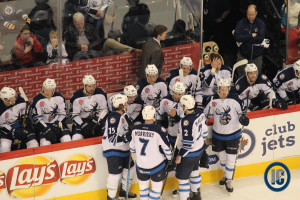 It was a disappointing result for the Moose, especially since they actually played quite well for most of the game. Turnovers were a killer – Patrice Cormier suggested after the game that four goals were “given” to the Wolves – and Head Coach Keith McCambridge echoed that sentiment. If there is a silver lining, it’s the fact that they were able to out-shoot the Wolves 36-to-19, and carry the play for long stretches. For a team that’s been out-shot two-to-one on more than one occasion, that’s progress.

Jiri Fronk – He scored the tying goal in the 3rd – his 1st AHL goal in just his 4th game. (The Wolves’ goaltender may have lost his jock on the play). He was noticeable at other times as well, including a great chance late.

Chase de Leo – He finished a great passing play for the Moose’s first goal, and now has a 3-game point streak. He is beginning to play a feature role on the powerplay, helping distribute the puck from near the left-point/half-wall, and generally looks more confident and assertive on the ice.

Matt Halischuk – While he didn’t show up on the scoresheet, Halischuk is beginning to find his game. A crafty player with soft hands, he was dangerous around the net tonight; his offensive contributions are likely to increase as he builds chemistry with his new teammates.

For a link to the game sheet click here

Did Nic Petan miss an opportunity with the Manitoba Moose?
Game 13 Recap: Moose 3 Wolves 2 in OT