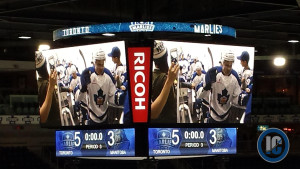 The Moose opened the 2015-2016 season on the road at Ricoh Coliseum in Toronto, falling 5-3 to the home town Marlies. The Marlies were able to control play for much of the game, generating lots of good scoring chances and also hitting (at least) three posts. Leafs’ prospect William Nylander opened the scoring on the powerplay, and dazzled at other times with his high-end skill; by game’s end, he had 9 of the Marlies’ 34 shots. Overall, the powerplay proved to be the difference – the Moose went 0/4 while the Marlies scored on 2 of 4, including the eventual game winner late in the second.

The Moose got all three goals of their goals from defencemen – in the first period, Brenden Kichton snuck into the slot and fired one high glove, while Jay Harrison scored two, including one with just under two minutes to play to make the score 4-3. The Moose had other good chances too, including breakaways by Joel Armia and Scott Kosmachuk, the latter of which actually beat the goaltender, but caught the bar.

The first two periods were extremely physical, with more than a few big open ice hits, including one by Julian Melchiori which drew the game’s first penalty. This sequence also led to a fight between J.C Lipon and Matt Frattin, as Lipon stuck up for Melchiori following the hit. The physical play calmed down in the third, as the Moose focused on trying – literally – to even the score.

One player who was quietly impressive tonight was Jan Kostalek – a smart, composed defenceman who makes good decisions, and very precise passes. When a scout says of a player, “he does the little things well”, they’re talking about guys like Kostalek. He also showed a desire and efficacy in pinching down in the offensive zone at just the right times. In some ways, Kostalek’s on-ice instincts are similar to the Jets’ top defensive prospect, Josh Morrissey. (While Kostalek is a good skater, Morrissey’s sublime skating ability is what separates him from not only Kostalek, but most other players.

The Moose will have a chance at redemption tomorrow afternoon as they take on the Marlies again at Ricoh Coliseum. Thomas Raffl – the last player cut from Jets’ camp earlier this week – left tonight’s game after taking a hit in the second period. His status for tomorrow in unknown at this point.