Recapping the second Moose game of the season. 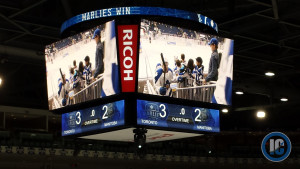 The Manitoba Moose were in Toronto for the matinee of a two-game series against the Marlies at Ricoh Coliseum. And while the Moose came in eyeing a win after last night’s 5-3 loss, the Marlies were able to prevail 3-2 in a shootout.

The Moose drew first blood 8 minutes in when John Albert drove wide and found J.C Lipon in the slot, who buried it behind goaltender Garret Sparks. However, after penalties by two veterans – MacWilliam and Harrison – gave the Marlies their second full 5-on-3 of the game, Winkler boy Byron Froese was able to squeek one past a screened Eric Comrie to even things up. Just 5 minutes later, an errant pass by Jan Kostalek led to another Marlies goal, and the Moose found themselves down 2-1 after 2.

The Moose came on strong in the third looking for that tying goal, outshooting their opponents 12-5 while generating some high-quality scoring chances. J.C Lipon came in on a two-on-one with a hard driving Jimmy Lodge, and tried unsuccessfully to beat Sparks high-glove. Armia, De Leo, and Fraser also had good chances but weren’t able to convert. However, with 2 minutes left, Matt Halischuk threw a puck on net, which was smartly picked up Chase De Leo, and centred out front to Ryan Olsen. Olsen turned and managed to beat Sparks to tie things up at two.

An exciting 5 minutes of 3-on-3 overtime solved nothing, so the teams went to a shootout. Armia, Albert, Fraser, and De Leo all shot for the Jets but weren’t able to beat Sparks, while Comrie – who made a particularly great toe save on Connor Brown – was finally beaten in the 4th round by Froese, who again went five-hole to end the game.

Trends to Watch For:

If the first two nights are anything to go off of, goaltending will not be a problem for the Manitoba Moose. After a very strong game last night by Connor Hellebuyck, tonight’s game was basically the Eric Comrie show. Comrie was without question the Moose’s best player, stopping 39 of the 41 shots he faced, including several tough scoring chances in tight. He was particularly exceptional to start the game, as the Moose came out of the first period up 1-0, despite being outshout 20-6. Perhaps his biggest stop of the night was with 30 seconds left in the 2nd period, when he shut the door on a breakaway which would have made the score 3-1. The Jets’ organization has to be excited to have two young goaltenders, both of whom clearly have NHL potential.

Another themes which appeared this weekend was discipline – for the Moose, the march to the penalty box started again started early tonight, with Ryan Olsen, Andrew MacWilliam, and Julian Melchiori all going off in the first period with minor penalties. As a result, they faced several minutes of 5-on-3 through the course of the game, and if not for Eric Comrie, likely would not have been in this game, as the Marlies powerplay was controlling the puck with NHL-type skill. Head Coach Keith McCambridge spoke about discipline after the game, and knows that his team needs to improve here.

The Moose play their home opener on Thursday at the MTS Centre. At 0-1-1, they’ll be looking to get back to five-hundred against the Ontario Reign – the farm club for the Los Angeles Kings, and (essentially) last year’s AHL Calder Cup Champs. (Technically the Kings’ prospect played in Manchester last season, but a similar group now plays for Ontario).

For a look at the stats sheet from tonight’s game click here.