A preview for the upcoming 2015-16 season of Manitoba Moose hockey. 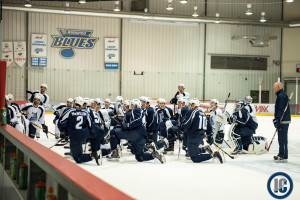 A Model of AHL Success

In 2012-2013, the Tampa Bay Lightning farm system was sitting on a few incredibly undervalued assets. They had a College graduate from the Maritimes named Alex Killorn who was a 3rd round pick ages ago, back in 2007. They also had two draft-day afterthoughts – one selected in the 7th round, the other, never drafted at all – their names were Tyler Johnson, and Ondrej Palat.

Evidently, Palat and Johnson weren’t concerned that their “draft pedigree” – or lack thereof – might hold back their professional hockey careers. They ended up leading the Syracuse Crunch to the AHL Finals in 2013, along with help from a few other *current Lightning players – Andrej Sustr, Vladislav Namestnikov and J.T Brown. Just two years later, this group suited up for Tampa Bay in the Stanley Cup finals, with Johnson being arguably the team’s best player through the first three rounds. (Until breaking his wrist).

*The team also had then Lightning prospects Radko Gudas and Brett Connolly who now play for other NHL teams).

Interestingly, the team they lost to in the 2013 AHL Final – the Grand Rapids Griffins (Detroit), were pretty much the same story. In just two years’ time, the Wings were able to graduate 7 of those players to the big club, including a few very familiar names, like Tomas Tatar and Gustav Nyquist, in addition to Petr Mrazek, Riley Sheahan, Tomas Jurco, Teemu Pulkkinen, and Luke Glendening (Xavier Ouellet joins that list this season).

To further belabour this point, and use an example a little closer to home, when the Vancouver Canucks went to Game 7 of the 2011 Stanley Cup Finals, they had 8 former Moose players in their lineup – Ryan Kesler, Alex Edler, Kevin Bieksa, Alex Burrows, Mason Raymond, Jannik Hansen, Cody Hodgson, and Cory Schneider.

The Importance of the AHL

In all, *over 80% of NHL players spend time in the AHL. So for every Mark Scheifele, who skips right from amateur hockey to the NHL at the age of 20, there are at least 5 or 6 Josh Morrissey’s who get the benefit of AHL experience. You might think that the AHL is a place for late bloomers and fringe NHL’ers, but that’s simply not true. Many of the NHL’s top players have spent significant time in the AHL – Norris Trophy winners like Duncan Keith, Zdeno Chara, and P.K Subban, nominees like Shea Weber and Ryan Suter, and likely future nominees, John Carlson, Tyson Barrie, and Roman Josi. Perpetual Selke winner Patrice Bergeron played in the AHL, as did his teammate, and two-time playoff scoring leader, David Krejci. Former Hart Trophy winner Cory Perry, and his teammate Ryan Getzlaf played briefly in the AHL, as did last year’s scoring leader, Jamie Benn, and Flyers’ star Claude Giroux. And the majority of the NHL’s starting goaltenders have played in the AHL, including Conn Smythe winner Jonathan Quick, Vezina Winner Tuukka Rask, Vezina nominee, Pekka Rinne, two-time cup winner Corey Crawford, and other current top goalies like Ben Bishop, Braden Holtby, Devan Dubnyk, and Semyon Varlamov.

*Roughly 83% of NHL’ers spend some time in the AHL

So is an organization’s American Hockey League squad important? Absolutely. For the majority of NHL teams – who don’t select at the very *top of the NHL Entry Draft year after year – most of their young players will spend time developing in the American Hockey League. Do it right, and you may produce a winner down the road. Do it wrong and you’ll probably never reac the pinnacle of success.

*Teams like Edmonton recently, and Pittsburgh in the mid-2000’s, select a lot of players 1st or 2nd overall; these types of players typically have so much talent that they skip the AHL altogether (though this may not be a good thing for each and every player)

Compared to last year’s team in St. John’s, the Moose have added a ton of experience. With the AHL assignments of forwards Matt Halischuk, and Matt Fraser, and defenceman Jay Harrison, the Moose get three veterans who spent last season in the NHL. They also added Thomas Raffl, who has spent the past 9 years playing professional hockey in Austria and Sweden, and freshly minted Assistant Captain Andrew McWilliam, who spent most of last season with the Toronto Marlies, but also played a few games with the Maple Leafs. They also added some depth with Kellan Lain and Darren Kramer, each of whom played last season in the AHL. This veteran presence won’t just be good in the locker room, or off the ice, but we’re talking about a group of high quality pros who will bring it on the ice.

On the other end, the AHL rookies include forwards Chase de Leo, Axel Blomqvist, Jimmy Lodge, and Jiri Fronk, defencemen Jan Kostalek, Aaron Harstad, Peter Stoykewych, and Brennan Serville, as well as goaltender Eric Comrie. While Josh Morrissey is starting his first full season in professional hockey, he has already suited up for 28 AHL games, including 20 during the Ice Caps’ 2014 run to the Calder Cup. For all but Morrissey – who many expect to make a fairly short stop in the AHL – we will be getting to know these Moose players very well.

The returning forwards include recently named Captain, John Albert, Assistant, Patrice Cormier, Scott Kosmachuk, J.C Lipon, Ryan Olsen, Austen Brassard, and Joel Armia – who came over late last season in the Evander Kane trade. Returning defencemen include Brenden Kichton and Julian Melchiori, and in net, Connor Hellebuyck. (More on him later). Along with the three former NHL’ers, this group will former the backbone of this club.

Up front, the Moose boast good size, with guys like Blomqvist, Raffl, Armia, Cormier, Olsen, and Brassard all at least 6’2, 200. The only really small player on the team is Chase de Leo, who is generously listed at 5’10, 185, but more than makes up for it with skill and smarts. There is also very good skill on the wings with Armia, Kosmachuk, Fraser, and Halischuk, and grit from the likes of Cormier, Olsen, and crowd favourite, J.C Lipon.

On defence, there’s a nice blend of puck-moving guys like Morrissey, Kichton, and Kostalek, and defensive-minded players like Harrison, McWilliam, and Melchiori. Outside of Morrissey and Melchiori, one potential issue for the d-core is foot-speed.

If you had to pick an MVP before the season starts, it’s definitely Connor Hellebuyck. Although he came into last season as a rookie in the pro game, by year’s end he had played in the AHL All-Star game, and dominated the World Hockey Championship for Team USA. Many believe that he is the Jets’ starter of the future, and that it may be his last season in the AHL. While his stats from last season were impressive as a whole – 28-22-5 with a goals-against-average of 2.58 and a save percentage above .920 – if you slice out the first 8 games of the season (call it an adjustment phase), and the last 11 games (the Moose were well out of playoff contention), there was a 39 game stretch where he was dominant, going 22-12-3, with a 2.22 G.A.A, .933 save percentage, and 6 shutouts. (His shutout total for the season). With a stronger team in front of him, I would expect his numbers to look more like that 39-game subset, rather than his 59-game total.

Playing in the AHL’s Central Division

The Moose find themselves in the Central Divison, along with the Charlotte Checkers (Carolina), the Chicago Wolves (St. Louis), Grand Rapids Griffins (Detroit), Iowa Wild (Minnesota), Lake Eric Monsters (Columbus), Milwaukee Admirals (Nashville), and Rockford Ice Hogs (Chicago). The Moose and their fans will get to see some great young prospects from these teams, like Mike Reilly in Iowa, Kevin Fiala in Nashville, and Oliver Bjorkstrand in Milwaukee, just to name a few.

Where will the Moose finish in the standings? I wouldn’t even hazard a guess. It’s hard enough to project the NHL Standings, so you can imagine what it’s like to do in the AHL, where roster turnover is significantly higher. What I will say is that the Moose should have one of the best goalies in the AHL, so they will likely be in the thick of the playoff race this season.