Thorbs was the fourth player to be handed the Stanley Cup on Wednesday night.

From the GST line to ‘Scoreburn’ to dancing with his fists, Winnipeg Jets fans always appreciated the contributions of Forward Chris Thorburn since his arrival along with the team back in 2011. Today he is a Stanley Cup champion after the St. Louis Blues defeated the Boston Bruins in Game 7 of the Stanley Cup last night. 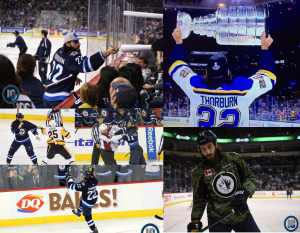 While some may point out that Thorburn’s time this season with the Blues was limited to just one regular season game he was a well respected guy with his teammates as was evidenced by the fact that he was the fourth person handed the Stanley Cup despite not playing a minute of playoff hockey.

Still so cool to see Chris Thorburn have his moment with the Cup. What a great story for him and his family #StlBlues pic.twitter.com/gcFxE95lCC

The Blues recalled Thorburn in April after he spent the majority of the season in the AHL with their minor league team the San Antonio Rampage which made this season a tough one for the long time NHL veteran as his family had remained in St. Louis all year.  Last night Elliotte Friedman revealed that because the team did this Thorburn’s NHL medical coverage for his son Bennett, who is autistic, kicked back in.  Classy move by the organization for a well respected veteran.

Last season was the first time Thorburn visited Winnipeg since he had been selected by the Vegas Golden Knights in the Expansion Draft (he thereafter signed a two-year deal as a UFA with the Blues on July 1st, 2017) and as you’d expect it was a warm welcome received by Thorburn:

Was great to welcome back Chris Thorburn, former Jet and the current franchise leader in games played, to @BellMTSPlace? during last night’s game against the Blues! pic.twitter.com/OorYlM4YR4

And he spoke about his connection to Winnipeg after the game:

Chris Thorburn on his return to Winnipeg: pic.twitter.com/VG3WjlQxk9

So it should come with little surprise that this longtime fan favourite is getting plenty of kudos (perhaps the most we’ve ever received for one post on Instagram) from Jets fans across the country who are happy to see him crowned a Stanley Cup champion as his career begins to wind down.