Chris Thorburn spoke after the game in Winnipeg about playing against his former club.

Chris Thorburn played ten seasons for the Thrashers and Jets organization compiling 313 games with Atlanta in four seasons and 396 with Winnipeg over six seasons for a total of 709 games, which is the currently the franchise record.  Worth noting that Bryan Little is nipping at the heels of his former teammate and at 706 games will surpass Thorburn when the Oilers come to town on December 27th.

Thorburn quickly became a fan favourite as a member of the GST line during the first season for his willingness to defend his teammates and score the occasional highlight reel goal which earned him the moniker “scoreburn”. 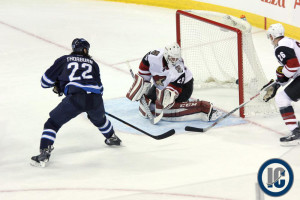 Here is the video the Jets played for Thorburn during a commercial break:

Was great to welcome back Chris Thorburn, former Jet and the current franchise leader in games played, to @BellMTSPlace? during last night’s game against the Blues! pic.twitter.com/OorYlM4YR4

While his team didn’t win the game I had the chance to speak with him following the contest to get his thoughts on the crowd reaction as well as what it meant to actually get onto the ice to face off against his former club.

On the fan reaction during the anthem when he was shown on the jumbotron:

“It meant a lot. It was emotional. It was just a great moment, one I won’t forget, just like my time here. Lot of good stuff happened to me here. Daughter being born here, lot of ties, lot of relationships, friendships. So Winnipeg will be in my life and my family’s life for the rest of our lives. I’ve said it probably four times already in my interviews. It’s a chapter that is over but at the same time it continues within our family.”

When he actually stepped on the ice to face his former club for the first time in Winnipeg:

“Legs were numb. Goosebumps. Kind of every emotion that you could imagine. I was excited. I saw it on the calendar in the summer. I see the back-to-back. I’m stressing out about it in the summer….”

You can hear the full audio of our post-game scrum with Chris Thorburn here: