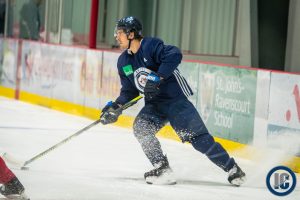 The Jets are back on the ice for the final skate before the regular season kicks off tomorrow.  They are scheduled to practice again in Winnipeg on Wednesday before they leave to kick off the season with a four-game Metropolitan Division road trip starting in New York on Thursday night.

They have to get down to 23 by 4 pm CST today and they made their first move towards roster reduction on Monday when they re-assigned five players to the Moose taking them to 24 players on the roster.  Expectations are Bryan Little will begin on IR.

For now practice begins with 24 players on the roster and 23 on the ice.  According to Scott Billeck of the Winnipeg Sun:

David Gustafsson is the extra forward.

Coach Maurice:  Announcing that Josh Morrissey has agreed to be an alternate captain.  Health update on Little and Beaulieu.  Announcing Carl Dahlstrom has been picked up on waivers.  Using Andrew Copp in the middle of Connor and Laine.  On Eric Comrie being claimed.  Working on the power play today.  How does the role change with Morrissey vs Byfuglien on the power play?  On the composition of the PK unit.  Is the plan not to use Wheeler/Scheifele on the PK?  Was there any consideration to changing Ehlers starting with Scheifele and Wheeler once Kyle Connor signed?  The chemistry that Connor and Laine have had in the past.  What does he know about Carl Dahlstrom?  Are Little/Beaulieu on IR?  What has he liked from Heinola?  Status of Niku?  Lack of defence pairings on the ice.  What’s the advantage to rotating the D pairs?  On the secondary PP unit, will they use four forwards vs three forwards/two D?  Reflections on the way the Jets played in Nov/Dec of last year.  Places they look for offence in the O zone.

Bryan Little has a concussion and Nathan Beaulieu is out at least a month with an upper-body injury.

Morrissey gets a letter:

Jets have designated Josh Morrissey as one of their alternate captains.

The Jets are scheduled to practice at Bell MTS Place on Wednesday and will thereafter depart for New York to kick off the 2019-20 season against the Rangers on Thursday.