Eight years ago today it was official: The NHL was returning to Winnipeg

A look back to when it became official that NHL hockey was returning to Winnipeg.

As many around these parts can recall there was plenty of speculation leading up to the official announcement of the return of NHL hockey to Winnipeg after the original Jets 1.0 left for Phoenix, Arizona following the conclusion of the 1995-96 season.  There were my daily Drama in the Desert morning papers which fans around these parts ravenously devoured with any morsel of news about the NHL coming back to Peg’ city.  Eventually it morphed into Drama in the Desert and Dixie after Bill Daly on the Illegal Curve Hockey Show on November 27th of 2010 discussed the Atlanta Thrashers.   Darren Ford’s Return of the Jets web site (which he shut down once the news became official) had the Jets-O-Meter which many diehard fans followed during the lean years and which TSN later adopted.  NHL fans in this province watched it closely (translation: multiple times per hour) to see how their fortunes would rise and fall on a daily basis.  And then it became official and the rest is history.

As you would expect Jets fans flocked to the Forks followed by Portage and Main which was well documented by us here. 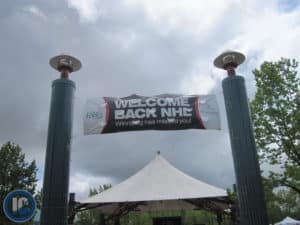 For curiosity sake I looked back at the team the Jets had for their first regular season game back in Winnipeg when they took on the Montreal Canadiens back on October 9th, 2011:

Just four players remain on the squad from that 2011 team.  Here is how the Jets lineup looked in their final game against the Blues to close out the 1st round of the playoffs this season:

Last season ended with a lot more optimism than this one as there are a lot more question marks with RFAs and UFAs heading into this summer.  But with a solid core this is still a team that has an open window to challenge for the Cup.