Lots of roster uncertainty for Winnipeg. 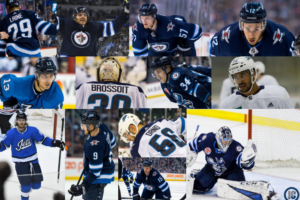 It has been well documented that it is going to be a busy summer ahead for Jets GM Kevin Cheveldayoff and his staff as they head into an off-season with plenty of uncertainty surrounding the roster composition for next season.  According to CapFriendly the Jets have just 12 players under contact for the 2019-20 campaign which means there are a number of UFAs and RFAs that will be in need of new contracts either with Winnipeg or with new NHL or AHL teams.

And it won’t just be the Jets that have players in need of new contracts as their AHL club the Manitoba Moose also have a number of players, both prospects and depth players, who will be in need of new deals, including:

Arbitration eligible is “a contract negotiation method that uses a third party arbitrator to determine a fair contract term and length for an expiring RFA player. Arbitration can be requested if a player meets the following conditions.”  For the conditions required click here.

All of which translates to a very busy spring for this organization as they try to get some big contracts done (Laine, Connor) and also get some key pieces signed on the dotted line.  We will have plenty more to come regarding the Jets and Moose roster.  Click here to listen to what Jets GM Kevin Chevledayoff had to say on Monday about his pending UFAs and RFAs at the end of season media availability.