Note II:  If you’re looking to buy tickets to the 2019 Heritage Classic between the Jets and Flames next October you’ll be able to get tickets at 10 am.

The Athletic Winnipeg:  A look at which Jets could stay and which could go this summer.  (Paywall).  Cannot help but think of the song by The Clash ‘Should I Stay or Should I Go’ with that headline.  Murat takes a look at which players may or may not be wearing the Jets logo next season.

Winnipeg Sun:  You be the boss – What should the Jets do now?  Wanna be an armchair GM?  Well take the Sun survey to get your thoughts on the direction of the local NHL squad.

Winnipeg Sun:  Five key questions for the Jets.  Ken’s list includes: 1) Who is behind the bench? 2) Where does Jacob Trouba end up? 3) What does Patrik Laine’s next contract look like? 4) Who is on defence? 5) How long does Laurent Brossoit sign for? 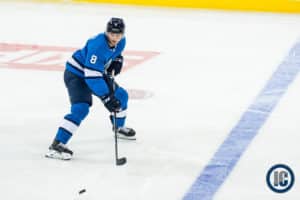 Illegal Curve:  48 percent of NHLPA reps favour playoff change.  What if the Jets and Blues series you saw to kick off this post-season would instead have been Jets and Leafs?  In one scenario that is what would have happened.  Do you like the current structure?

TSN analyst Mike Kelly joined Hustler and Rick Ralph and discussed the end of Winnipeg’s playoff run and Round 2 of the Stanley Cup Playoffs. They also touched on parity in the league, how St. Louis was the worst possible matchup for the Jets and why some of the biggest upsets in playoff history happened this season.