I am of the belief if you don’t shoot, you can’t score.  Clearly that mantra is also shared by Jets defenceman Dustin Byfuglien, who had a team leading shot total of 347.  What is especially interesting was that it was so much higher than Evander Kane’s 234 (a difference of 113). 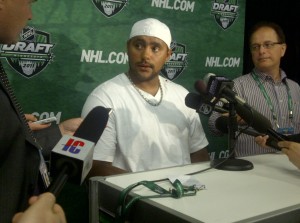 I found it unusual for a defenseman to lead his team in shots, especially by such a high amount.

I began to wonder:  Where do Dustin Byfuglien’s 2010-11 shots rank among the league leaders?

Read more about Dustin Byfuglien’s historic season after the jump.

The table below shows last season’s top 10 in shots.

Dustin Byfuglien is in the top tier among the league in terms of shots.  His 347, trail only Alexander Ovechkin, now sponsored by Mr. Big.  All of the above players are classified as “All Stars”.  Additionally, no other defenseman makes the top 10 in shots.  The next defenseman on the list is Zdeno Chara (20th in the league) with 264 shots.

Big Buff’s 2010-11 season is in elite company, but how elite?  At this point we should take a look at the season leaders for shots by a defenseman.

As the song goes: “one of these things is not like the other” — all of the players are on the list are Hall of Famers, except Dustin Byfuglien.

The song continues: “these things belong together” — everyone in the top 10 has a Stanley Cup ring.

Continue down the list, available here at NHL.com of the past 30 single season leaders in shots by a defenseman, the most recent aside from Byfuglien’s previous season, is future Hall of Famer Rob Blake in 1999-2000.

Other names in the top 30 include Hall of Famers & Stanley Cup Winners, Brian Leetch and Al MacInnis.

Is this a coincidence? Or will Winnipegger’s see a similar career path from the 26 year old though his 5 year contract with the Jets?  Only time will tell…or something cliche like that.

Previous articles by the author