Sportsnet:  Quite a buzz for Jets.  Brings a tingle to the spine as you think back to just a few months ago, when this city was without NHL hockey and now our Young Stars are 1-0 in the Tournament and we are one week away from the 1st exhibition game (that matters) in this city in 15+ years.

Winnipeg Sun:  Scheifele shows dazzling potential.  It was enough to get Jets fans jumping off the couch as they saw the potential of the Jets #1 draft pick last night.

Winnipeg Free Press:  For Zach, it’s all about the money.  End of the day, he wants what he feels he is entitled to and the team see’s that number differently.  For Jets fans, it’s about the two sides meeting in the middle, at a number they can both be comfortable with.

After the jump more on the Bogosian contract or lack thereof, Jets’ Yuen showcases an awesome skill set, prospect Pasquale’s professional edge, the oddmakers not pumping the Jets tires and you now have a chance to be a Jet.  In ‘Around the NHL’ news Leafs prospect at home, TMZ report about Oilers owner moving away from Oil town and Flames prospect collects garbage goals.

Winnipeg Sun:  Jets’ Bogosian unsigned but optimistic.  Can this deal get done before Saturday?

Winnipeg Free Press:  Yuen showcases an awesome skill set.  He and Mark Scheifele were the last two skaters to leave Day 2 of the Jets rookie practice and they put on a dazzling display of trick plays. 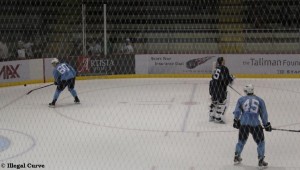 Winnipeg Sun:  Jets prospect Pasquale’s thrown to the wolves.  He looked good during the rookie practice and again last night.

Winnipeg Free Press:  Old Jets voice shut out of play-by-play jobs.  While many were hoping that this blast from the Jets past would be the new voice of the Jets 2.0, the choice was made to go in a different direction.

Victoria Times-Colonist:  Oddsmakers not pumping Jets’ tires.  While the rookies might have gotten Winnipeg off to a 1-0 start in the Tournament, the oddsmakers aren’t giving the Jets much of a shot in the regular season.

Winnipeg Sun:  Your chance to be a Jet. Our Michael Remis will have more on the release of NHL 12.  Throngs of Peggers showed up last night to meet Evander Kane.

National Post:  A look at five troubled NHL franchises.  Amazing considering 3 of the 5 on the list have won Stanley Cups.

National Post:  Leafs prospect Olden already feeling at home.  Not surprising to see that some want to develop at home in Europe, but seems this Leafs prospect is happy with his switch to North America.

Edmonton Journal:  Katz reportedly living in Vancouver. Probably the only bigger sin would be a move south to Calgary.

Calgary Herald:  Flame hopeful doesn’t mind garbage goals.  All that matters is that they go in, not how many times you make the Sportscenter Top 10.