TSN:  Is Atlanta in play?  The key point is the question mark at the end of this article’s title.  Nobody, even those in the “know’ seem to be able to give a clear indication as to which franchise is in play.  One week it’s for sure Phoenix, then the next it’s Atlanta.  The losers from all this speculation;  fans in Atlanta, Phoenix and Winnipeg.

Globe & Mail:  How the NHL could drop the price for the Coyotes.  Wonder if TNSE will be getting a similar discount when the time comes.  The key line for fans in Winnipeg having a heart attack every time a new article drops;

Winnipeg Sun:  Coyotes not coming to Peg says Winnipeg Mayor Sam Katz. The mayor is the owner of a professional sports teams so he does know something about contractual obligations but at this point I think people are just guessing.

Canoe:  Teemu Selanne in Winnipeg?  I think most people in Winnipeg would simply be happy to see the Finnish Flash back in any capacity, even if it’s on the opposing team.  As much as we love our former hero’s when they’ve left the team, I can’t think of any other player who would get a longer standing ovation from the Winnipeg crowd.

Winnipeg Free Press:  Jets wouldn’t stay for love nor money.  The generosity of people in Winnipeg doesn’t surprise me.

TSN:  Jets Meter falls.  Word of the “creative financing” between Hulsizer and the COG as suggested by TSN  Hockey Insider Darren Dreger has caused the Meter to drop 2 points.  Winnipeg’s collective heart skips a beat.

Windsor Star:  Domino’s owner explains the ad he took out in Wpg Free Press. Well his ad sure achieved its goal of getting people talking.

Toronto Sun:  NHL’s Daly calls Goldwater irrelevant to Coyotes sale.  If they are so irrelevant then why does the NHL continue to speak about the GWI?

Winnipeg Free Press:  Moose slip noose.  Congrats to the Manitoba Moose (Vancouver Canucks farm team) who came back from a 3-1 series deficit to win Game 7 against the Lake Erie Monsters (Colorado Avalanche farm team) 4-1 last night.  They now advance to the 2nd round and have a date with the Hamilton Bulldogs (Montreal Canadiens farm team). 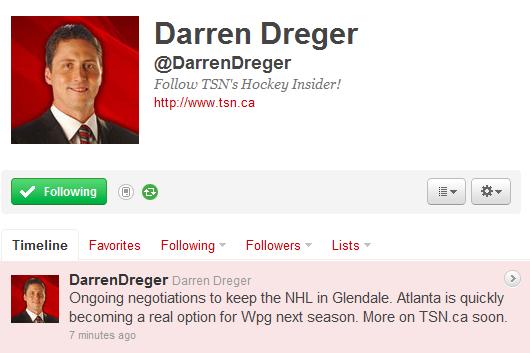 Drama in the Desert: Winnipeg needs to cool Jets, Manitoba companies already jumping on NHL bandwagon.
Drama in the Desert: NHL sends Glendale 25 million dollar bill for Yotes losses but total for season is 36.6 million, Thrashers appear to be NHL’s sacrificial lamb, Does TNSE have the luxury of a choice between Phoenix and Atlanta?