Drama in the Desert: NHL sends Glendale 25 million dollar bill for Yotes losses but total for season is 36.6 million, Thrashers appear to be NHL’s sacrificial lamb, Does TNSE have the luxury of a choice between Phoenix and Atlanta?

TSN:  Unhappy anniversary – 15 years ago to the day the Jets played final game in Winnipeg.  A bitter day in the memories of many from Winnipeg, which we hope to erase with some impending good news.

Winnipeg Free Press:  Mayor’s speculation on NHL draws attacks.  Still a bit of a mystery why the Mayor chose to speak out.

Arizona Republic:  NHL sends Glendale $25 million bill for Yotes losses.  Wow.  Total losses 36.6 million for 8 months of hockey in the desert.  While I understand that Hulsizer intends on raising costs to generate revenue, I sure don’t see how he can offset those types of losses.

Winnipeg Sun:  Coyotes sale holding up Thrashers move?  Winnipeg finally in an enviable position, with not 1 but 2 potential franchises at it’s fingertips?  Then why does this entire process feel so stressful?

Winnipeg Free Press:  Winnipeg only option for Thrashers.  If you’re True North and you have the option to take either of these two franchises, which do you take?  The one that will cost you 145 million vs. the one that will cost you anywhere from 170-210 million.  The other advantage for Atlanta is that you are no longer saddled with the Winnipeg Jets baggage (as they might see it) and would allow you to go in a totally new direction.  But as Lawless points out and as we’ve entitled our posts, there continues to be a lot of Drama in the Desert.

CBC (Video – starts at 5:33):  After 40 Minutes.  Appears that the NHL views Atlanta as a sacrificial lamb.

Winnipeg Sun:  Jets star MacLean hopes ‘Peg doesn’t get burned by NHL again.  We at IC love to hear from former Jets, who usually have nothing but praise for the city.  Speaking of, we will be adding a new column in this vein, which we will be unveiled next week.  MacLean, currently an Assistant Coach with the Detroit Red Wings, is conflicted because he has a son who works for the Yotes.

New England Hockey Journal:  Stan Fischler Gossip.  Again and again, people around North America continue to act as if Winnipeg is a necessary evil, they don’t really want Winnipeg to return but they will accept the city if they must.  Here’s an idea, keep the NHL in Phoenix so you can keep the 5th largest TV market and also keep the 36.6 million dollars in annual losses.  I’ve said it before;  Winnipeg doesn’t need the NHL.  We want it, but we don’t need it.  Conversely, can the same be said by the NHL.  Don’t think so. 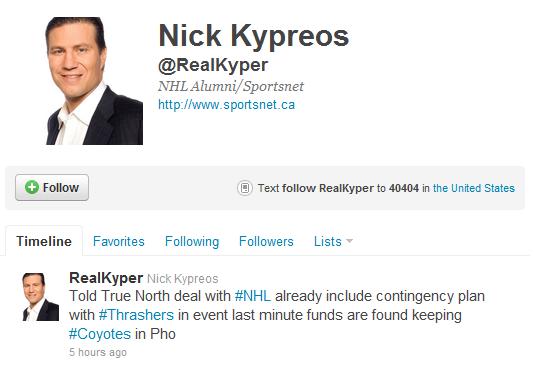