Drama in the Desert: Red Wings redux. Wings sweep the Coyotes. End of an era?

A heartbreaking loss for fans in the desert as unlike for Jets fans in 1996, they don’t know if tonight was the last NHL hockey game to be played by the Phoenix Coyotes.  Despite the fact that they began the game down 3-0 in the series, the building was buzzing at the drop of the puck.  The crowd seemed excited when they introduced prospective team owner Matthew Hulsizer, who had earlier faced some criticism for not making an appearance at game 3 in Glendale. 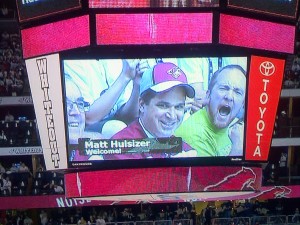 The 3rd period started with the game tied at 3’s but the veteran Wings were just too dominant and scored 3 to roll to a 6-3 victory.  When I watched the team’s skate to center ice to shake hands, I couldn’t help but flash back to that final game against the Wings in 96′.  And just like in 1996, there was Nicklas Lidstrom, shaking hands with the team he had just helped dispatch.

The Wings accomplished their goal of a sweep (which bodes well for their run to a cup since 5 of the last 6 cup appearances had the Wings sweep at least 1 opponent).  The Coyotes ended the night by saluting their fans, possibly for the last time. 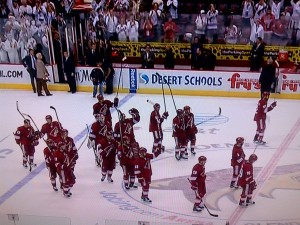 Stay tuned to Illegal Curve as we continue to cover all the Drama in the Desert.

Drama in the Desert: Goldwater Institute and Glendale Mayor to meet on Thursday, Hulsizer camp remains committed to Coyotes, TV market could prevent Yotes move to Winnipeg
Drama in the Desert: Phoenix fans not amused, Yotes on-ice season over but OT needed to save franchise off-ice, Matthew Hulsizer shows up for Game 4 but is it too late?