Breaking News: Final Vote was 5 – 2 in favor of the Coyotes.

Atlanta Journal Constitution:  How Thrashers fans are dealing with the team’s future.  Folks in Manitoba should have empathy for their brethren in Georgia.  They too seem to be on the receiving end of the NHL’s arms length “care” unlike the Coyotes.

Globe & Mail:  NHL’s return to Winnipeg may have to wait.  Not sure I agree with Mirtle that time may have run out.  Hartford Whalers owner Peter Karmanos announced the team’s relocation to Raleigh on May 6th, 1997.  NHL Commissioner Gary Bettman has already said that June 22nd is when the schedule gets released and we know it isn’t done quickly.  While I don’t believe a ton of time exists there is still a window in which to get this completed.

4. Word is The Raine Group, which is handling the sale of the Atlanta Thrashers for Atlanta Spirit LLC, is telling prospective buyers the team can be moved because having those dates available for other events (ie. concerts) is a better financial option than hockey. Neither a phone call nor a follow-up email were returned by 10 p.m. ET Monday.

Arizona Republic:  Ice Edge Holdings withdraws from Coyotes deal.  What doesn’t add up is if you are Ice Edge why pull out now?  Conceivably you are getting a lifeline extended to you by the COG so why suddenly abort when you’ve spent 2+ years trying to get this done?

TSN:  Glendale vote tonight has impact on Atlanta and Winnipeg.  It seems rather anticlimactic since the vote is expected to go 5-2 in favor of paying an additional 25 million next season to cover Coyotes losses.

Click the link below to see the rest of today’s additional news links, blog articles & our tweet of the day.

Winnipeg Sun:  Slam dunk in desert for Coyotes.  Apparently even little Logan won’t be enough to sway Councillor Lieberman this time, although it appears not to matter since he is in the minority.

“I’ve been on the council 20 years, and I’ve never seen us in such a position that we are now,” Lieberman said. “Why do we want to throw another $25 million in, when we lost the other $25 million even though we had been assured by everybody that it would never be used? Because if nothing happens, a year from now we will be in the same position.” 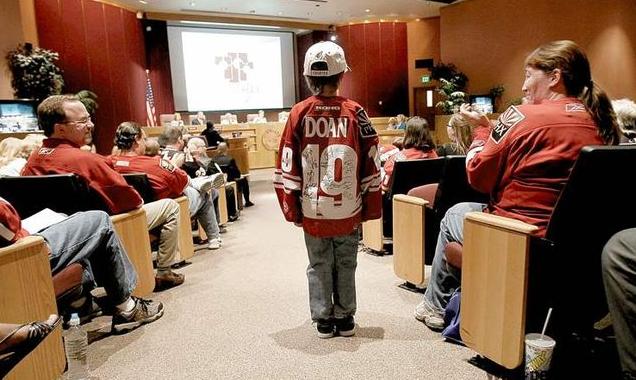 Arizona Republic:  Council vote could offer a reprieve in fight to keep Coyotes.  Don’t see how the catch-22 gets resolved.  This vote appears to put off the inevitable.  I’m sure the GWI has a good reason for allowing the 25 million to be used to extend the Yotes life by one year, but what changes exactly for next season?  You’re still going to require an owner who will want favourable economic concessions from the city and if GWI continues to threaten, I don’t see how the league isn’t right back here next April.

Goldwater Institute:  Avoiding a multi-million tax dollar “emergency” in Glendale.  I have to admit that I was surprised to read that the GWI isn’t objecting to the spending of a further 25 million to keep the team in Arizona.  Really does read as if they’ve resigned themselves to not suing (on this 25 million) if same is approved by council.

Atlanta Thrashers:  2011 Select-A-Seat.  Appears folks in Atlanta didn’t get the memo that their team is moving as they continue to proceed as normal, which in this case means selling season tickets on Thrashers NHL page.

Arizona Republic:  Confidential (draft) copy of the Agreement between the COG and the NHL.  Prepare to be bored to tears reading this Agreement.

Globe & Mail:  Lessons learned in Phoenix?  Really good read from Stephen Brunt.  Here are some words that should calm people in Winnipeg.

Winnipeg, you’re still going to get your hockey team. It just looks like it will be a different hockey team.

Quebec City, if you can get the money and arena together by this time next year, say hello to Les Coyotes.

SB Nation Arizona:  NHL manages Arena and Glendale city coffers to empty.  One of the biggest failures in the arena’s management is the lack of additional sources of revenue.

The Offside Blog:  What’s different from last year?  A pretty good assessment of what has occurred over the past year.  Perhaps he could have attributed those terse comments to the Illegal Curve Radio show, when the guys had Deputy Commissioner and chief legal officer of the NHL Bill Daly on the show back in November of 2010.

The Hockey News:  Coyotes staying will have a huge impact across NHL.  Not least of which would have Mike Illitch’s Red Wings moving over to the East.

AHL.com:  Moose lose the longest game in AHL playoff history.  Ironic that a team from Winnipeg is battling it out for hockey supremacy with Hamilton considering both teams were vying for the Coyotes. (Hamilton won in 3 OT’s).  Was last night the final game in Moose history in Winnipeg?  If it was, the city of Winnipeg owes a big thanks to the Manitoba Moose for a decade and a half of fun, family friendly, sports entertainment! 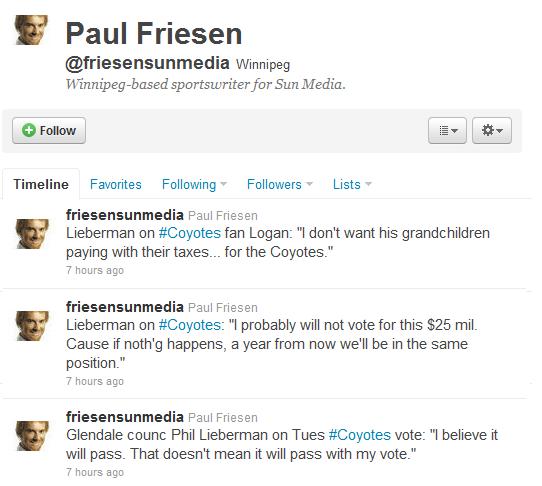