Drama in the Desert: COG goes all in for Coyotes, Saga of Yotes to end Tuesday, what does this mean for Winnipeg?

Winnipeg Free Press:  Coyotes chronicle to end Tuesday.  You have to give Councilor Lieberman credit.  He sure possesses some chutzpah….

“We do not have a signed deal with Hulsizer — and there is some discussion as to whether we will ever get one or not get one. I don’t personally want to give him $110 million,” said Lieberman. “In my mind, this (proposal) will give us a year to find somebody else who may be willing to buy it and come up with much more money. Real money — instead of city money.”

ESPN:  Glendale to vote on 25 million proposal.  Just when you thought things couldn’t get any crazier, they up the crazy level.  Should be an interesting vote on Tuesday.

TSN:  Glendale looking to renew contract.  GWI says they have to identify source of the money, but if this isn’t some backdoor way of financing Hulsizer, perhaps Goldwater will not sue.

Phoenix Business Journal:  Another 25 million from Glendale to keep Coyotes.  Perhaps if the Yotes fans support the team next season they might not cost the city the full 25 million.

Arizona Republic:  Glendale may pay NHL for more time to find buyer.  There is a lot of posturing going on between the COG and Matthew Hulsizer, he’s supposedly interested in buying the St. Louis Blues, the COG is talking about finding a “new buyer” including maverick councilor Lieberman throwing Jim Balsillie’s name back in ring.  I think these two need to realize that if they want to go to the prom, they aren’t finding better dates, so they need to figure out how to make it work between them. 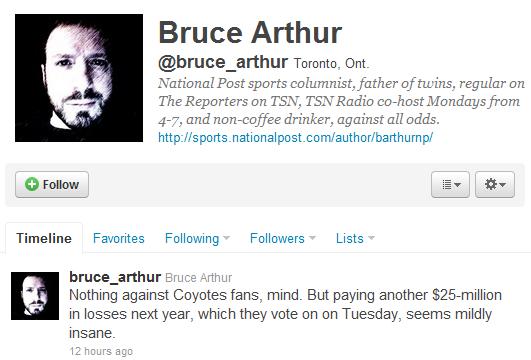 Breaking News: Drama in the Desert Gets More Dramatic
Drama in the Desert & Dixie: Interview with Thrashers beat writer Chris Vivlamore, Is Glendale weary of Hulsizer, picture of the new MTS Centre press box, how much longer will 29 NHL owners want to fund the Coyotes?