Drama in the Desert & Dixie: Atlanta Mayor says city wouldn’t consider Glendale style solution to save Thrashers, Q & A on Thrashers’ future, Is Matthew Hulsizer walking from deal to save Yotes?

Fan 590:  This isn’t an exit…yet.  Basically the Fan 590’s Greg Brady (our tweet of the day) was having a discussion with a Thrashers player he is acquainted with and he became privy to info and boom, it gets tweeted, people ask questions and it snowballs from there.

Atlanta Journal Constitution:  Is NHL abandoning Thrashers, Atlanta after rescuing others.  No question that if this franchise is moved, the NHL is guilty of standing by and letting it happen.  Which doesn’t, as Jeff points out, absolve ownership of culpability.

CBC (Elliotte Friedman’s 30 Thoughts): NHL should be more transparent about relocation. I have to agree with his position.  There is only so long you can do this to people.

Winnipeg Free Press:  No Thrashers bailout coming in hard hit Georgia capital.  It really shows you the lengths the NHL is willing to go to, to keep the NHL franchises where they are presently.  Some of these areas have been decimated by recession but instead of bringing it’s product to a city which has largely avoided said recession and is hockey mad, they choose to keep it in areas which for the foreseeable future are still in recovery mode, and won’t likely be using their disposable income on niche sporting events like hockey.


Winnipeg Free Press:  There’s a kind of hush…..While the primary parties may keep their tongues from wagging, I doubt the speculation we saw with Phoenix will die down entirely.

Atlanta Journal Constitution:  Q & A on the Thrashers’ future.   For those whose focus has primarily been on the desert, here is a Q & A to get to know what is happening in dixie. 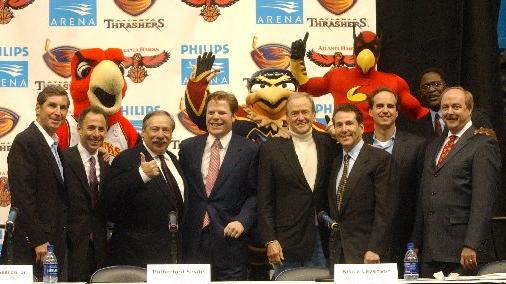 Atlanta Journal Constitution:  Thrashers’ future remains up in the air.  Doesn’t appear the Mayor of Atlanta (Kasim Reed) is as giving as Glendale Mayor Scruggs.

Reese McCranie, spokesman for Reed, said Atlanta has not been approached by the NHL about making a financial deal such as Glendale’s. Even if approached, the city — in the midst of pension reform and possible layoffs in 2012 — would not consider it, McCranie said.

Winnipeg Sun:  NHL fiasco far from over.  If I had a dollar for every rumour I heard, I might have enough to cover the losses for the Coyotes next season.

Arizona Republic:  Yotes GM Don Maloney facing challenge. The Coyotes have a number of free agents that they need to re-sign, not least of which is Winnipeg hater Ilya Bryzgalov.  However after his playoff performance, the payoff he was expecting might not be forthcoming.

Puck Daddy:  NHL responds to Thrashers -to-Winnipeg rumours.  Wake me when this mess is over.

ESPN:  Glendale vote = Yotes stability?  Not exactly.  While I understand that the continued threat of a lawsuit has the COG cautious in their dealings regarding the Coyotes, why punt Hulsizer after they’ve “saved” the team.  With Ice Edge confirming they are out, and with rumours that Hulsizer has walked away from the table, who is left to possibly save this team?

The Brawl (Wpg Sun):  Time to force NHL’s hand.  While I can understand his sentiment, I think that Winnipeg will have to remain in the patient, quiet mode if they want to gain entry to the “exclusive” club of 30 NHL cities.

Picture of the Day – Appears the Blue Crew is expecting to be back in business : 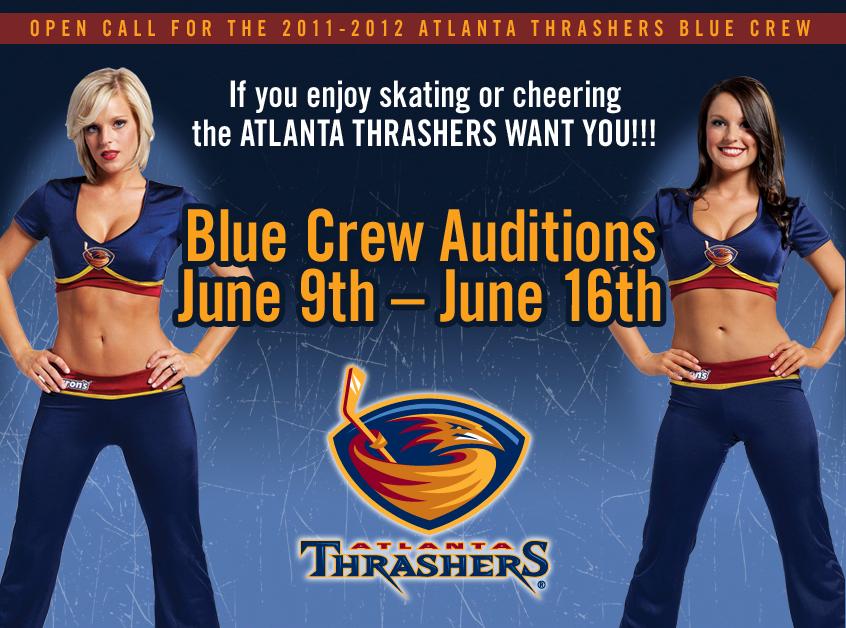 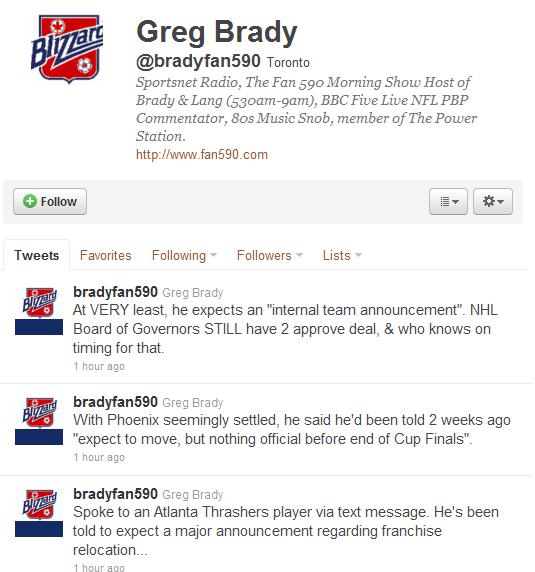