USA Today:  NHL needs to work as hard to keep Thrashers as it did for Coyotes.    Good read from Kevin Allen. 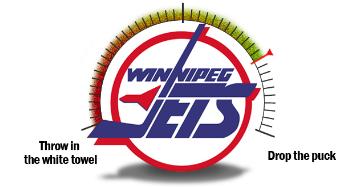 Atlanta Journal Constitution:  Unclear if Atlanta Spirit, True North in negotiations.  If the Levenson interview wasn’t clear that there is nobody with which the ASG is locally negotiating, I’m not sure what is.

National Post:  NHL hopes spring eternal in Winnipeg.  Every time you think that people in Winnipeg are fed up of this broken record, they request the DJ play that song one more time.

TSN:  Thrashers co-owner Levenson discusses future in Atlanta.  After watching the video (posted below as today’s video of the day) interview it is no wonder that the fans in Atlanta are as disenfranchised as they are. 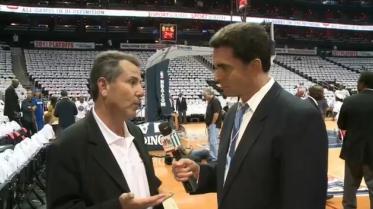 NBC Sports:  Why Atlanta moving to Winnipeg would become a dream for City of Glendale.  Good point.  The COG, as GWI attorney Nick Dranias pointed out during the Council meeting on Tuesday night, would finally have some leverage on the NHL.

Toronto Sun:  Open season on Thrashers.  The NHL spin masters clearly learned their craft at the same school as the Iraqi foreign minister who insisted that Iraq was doing well as the US army overran the city.

NBC Sports:  Bill Daly admits he “can’t guarantee” that Thrashers will remain in Atlanta.  Standard NHL non-denial denial.  Oftentimes our focus needs to be on what they aren’t saying.

Toronto Sun:  Puck fans duped by teen’s Twitter hoax.  Which is why you should take any news that is getting reported as “fact” on the twitter-verse as suspect, unless of course you’re reading the info from @illegalcurve.  For those who don’t use twitter here is the tweet that caused the big stir:

ESPN:  NHL commissioner Gary Bettman refutes relocation talk. He does make a good point about the lack of accountability for people who make grand statements but don’t feel any repercussions for the excitement/disappointment their comments elicit.


Picture of the Day: 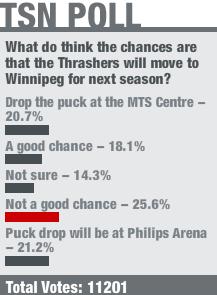