Drama in the Desert: Despite negotiations a stalemate remains, Glendale could learn from Yankee’s the price of relying on parking and more.

Winnipeg Free Press:  Tempest in an Arizona teapot.  Sometimes the bigger story is what isn’t said.

TSN:  Senator McCain wants deal to keep Coyotes in Glendale.  Can’t believe how much energy he is expending on this Coyotes deal.  People are always demanding to see Goldwater’s contributor’s but I’d be curious to see who has been giving to Senator McCain lately.

Globe & Mail:  Goldwater institute, Coyotes buyer in stalemate.  There have been times I was convinced that GWI would seek a compromise but they continue to stick to their guns.  While some have labeled them zealots, I guess they have the conviction to take a stand and not waffle because they’re told to.

Winnipeg Sun:  Goldwater still opposes Coyotes sale.  I wonder if, when Hulsizer was laying out his plan, he said, “listen Olsen, I’m going to make this brain dead simple for you”….

Arizona Capital Times (registration required):  Olsen: There’s an ‘anti-Goldwater campaign’.  No question the mud slinging has been fierce, but the GWI has equated itself quite well.

NY Daily News:  Yankee Stadium parking garages in financial hot water as spots sit empty even on game days.  Might want to alert someone in Glendale that sometimes the projections don’t hit their targets.

The Province:  Ex-Thrasher Ray Ferraro pulls no punches on the mess in Atlanta.   He certainly doesn’t mince his words.

Audio:
John Walton speaks with AHL President Dave Andrews about the situation in Winnipeg.   Says some really nice things about Winnipeg, including that Winnipeg along with Hershey are the two strongest AHL franchises.  Also indicates that they are monitoring the situation on a daily basis and that the fans in Winnipeg deserve NHL hockey. 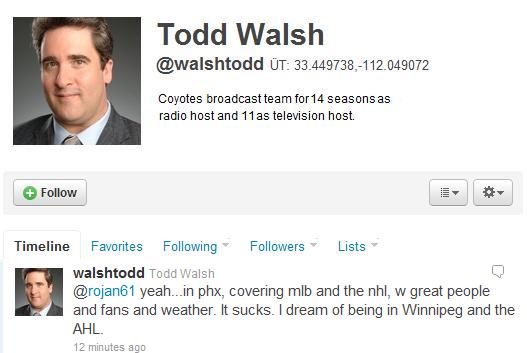 If you see a tweet that pertains to this situation in Phoenix and you feel it is worthy of being the Tweet of the Day, why not let us know.  Send us a Tweet@illegalcurve.

Drama in the Desert: View from Jobing.com pressbox last night, Suites available for the remaining Coyotes home/playoff games and more
Drama in the Desert: Is a deal to sell the Coyotes right for Glendale, Senator McCain ratchets up the intensity, Hulsizer’s broken spell check and more.