NBC Pro Sports Talk:  Shane Doan leads Coyotes through adversity.  No question that he has done an excellent job as captain of the Yotes to help keep the team focused on something they can control.

Kamloops This Week:  Jets fans dreaming of NHL.  Trust me, if this announcement is made, there won’t be one fan at Portage & Main, the entire section will be thronging with fans.

CJOB|68:  Former Jets Star Anders Hedberg is following the troubled sale of the Phoenix Coyotes from his home in Sweden.  He will be on Bob Irving’s show tonight.  Always nice to hear what former players have to say about the city.

Globe & Mail:  Goldwater, Glendale continue to sound off.  I agree with Shoalts that there really isn’t anything new in either release (unless you’re reading for quality of writing).  Additionally, he is likely correct in his assessment that it appears these bonds will continue to be delayed.

Montreal Gazette:  Coyotes’ fate barely rates a mention.  Put British Columbia born Chicago Cubs pitcher Ryan Dempster on my list of new favorite Cubs after he suggests that it would be “cool” to see hockey return to Winnipeg.

Glendale Star:  Goldwater still poised to sue.  I’m not sure if it’s a schtick but you have to appreciate Goldwater’s CEO Darcy Olsen’s desire to have all meetings conducted with transparency.  There is nothing the ‘average citizen’ hates more than government babying them and conducting meetings behind closed doors because apparently, what is in the best interest of said citizen, cannot be fully disclosed.

Arizona Republic:  Phoenix Coyotes continue to prove resiliency.  You have to really respect this team’s ability to put all the off-ice drama to the side and continue to win hockey games as they fight for a spot in the tough Western Conference top 8.


Arizona Republic:  A solution to assist sale of Coyotes.  Nice idea, but the NHL’s 29 other owners will never expose themselves to that much risk.

Arizona Republic:  I’m tired of Goldwater’s meddling.  I understand his frustration but at the same time, I would rather know all the details to this deal, then just accept the word of people with a vested interest in the project. 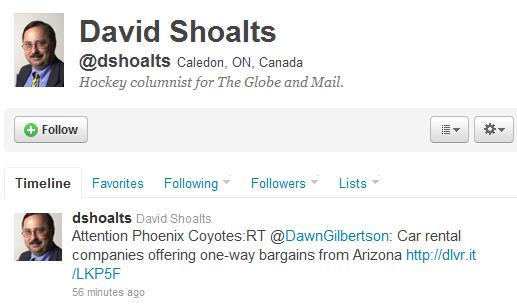 Thanks to IC reader Steve for alerting us to the above tweet.  If you see a tweet that pertains to this situation in Phoenix and you feel it is worthy of being the Tweet of the Day, why not let us know.  Send us a Tweet @illegalcurve.

Is there anything better (unless you’re a Flames fan) than watching the Finnish Flash still scoring at 40?  Last night Teemu helped the Ducks tie the game against the Dallas Stars with 5.4 seconds to go to send the game to OT, which Anaheim won.  I think this is, at least, the 3rd or 4th time he’s sent a game to OT in the last minute of the 3rd period this season.  Additional Point:  IC reader Steve also pointed out that Selanne is the first player in NHL history to score four game-tying goals in the final three minutes of regulation.