Fox Sports:  Is this it for hockey in Phoenix.  Standard Winnipeg has no real long term growth article which includes this gem “the reality that the league still views Phoenix as a better option”.  Makes an interesting point asking where prospective owner Mattew Hulsizer has been.

USA Today:  Coyotes look to ‘home’ ice against Detroit.  Doesn’t appear that Adrian Aucoin appreciates the Winnipeg chatter during the 1st round.

Toronto Sun:  The walking dead.   If this continues to follow the script from ’96 then the Coyotes will win Game 3 big time.

HNIC Satellite Hotstove (video):  The panel discussed the situation in Phoenix.  Last night on the Hotstove both Glenn Healy & Pierre LeBrun offered their comments about the situation in Phoenix.  Like how Ron MacLean tried to speed up the conversation to get the Winnipeg discussion in.  LeBrun’s comment “could have options including Hulsizer and not including Hulsizer” was very interesting.

Putting on the Foil:  Panelists of TSN’s “The Reporters” confident Phoenix headed for Winnipeg.  Nice summation of all the analysis that the TSN reporters discussed on the show.  Looks like everyone is talking bout the Peg’. 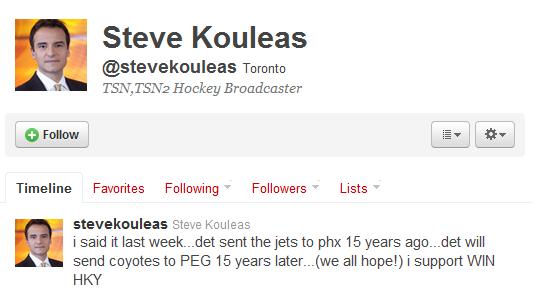 Drama in the Desert: Winnipeg no longer has to be quiet about NHL intentions, Goldwater CEO worthy adversary, Gov Brewer talks Coyotes.
Drama in the Desert: ESPN’s Pierre LeBrun talks about options other than Hulsizer which can save Yotes, Coyotes focus on Datsyuk not Peg, Deja Vous for Coyotes & fans.