CBC:  Elliotte Friedman’s 30 Thoughts.  While Doan is clearly conflicted about leaving Arizona, it sure sounded like he said he would go (however reluctantly) with the team, wherever they ended up in his interview with KTAR in Arizona.

23)  Do think, if the Coyotes move to Winnipeg, things will be worked out so Shane Doan doesn’t go with them. He has a no-move, but they’ll find out where he’ll want to go.

Friedman also has a  couple of Atlanta related thoughts;

28)  Interviewed Tom Glavine for our Inside Hockey piece on Donald Fehr this season. He used to own a box and then several season tickets for Thrashers games, but gave them up as his kids got older and he had less time to go. (Two of his sons are good hockey players.) Several times while we were chatting he mentioned how badly he wanted them to succeed.

29)  Glavine said one of the Thrashers’ biggest problems was football season. Friday night: high school. Saturday: University of Georgia. Sunday: Falcons. Tough to get fans against that.

The Province:  Canucks bring it home against Jets in 1992.  Many Manitobans are conflicted when it comes to cheering for another Canadian team in the playoffs.  While some would be happy to see a Canadian team win the Cup for the first time since 1993, others remember the damage the Jets suffered at the hands of these Vancouver Canucks.  Of course close to 1/2 the active playoff roster played for the Manitoba Moose, which makes the decision even more difficult and the Captain of the Hawks is from Winnipeg.  But if you were wavering watch this video and remember the rivalry.
http://www.youtube.com/watch?v=TiKbo7ZspJw


Picture of the Day: 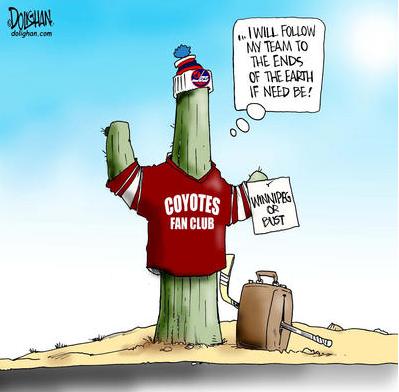 Drama in the Desert: CBC’s Don Cherry talks Bryzgalov and the Queen on Coach’s Corner, Bryzgalov’s Jekyll-and-Hyde goalie act, Do Edmonton and Calgary not want to see a team return to Winnipeg?
Drama in the Desert: Winnipeg needs to cool Jets, Manitoba companies already jumping on NHL bandwagon.