Do opposing teams have the book on Pavelec in the shootout?

Examining the trends for the Jets shootouts this season, Michael Remis has noticed some tendencies when players are shooting on Ondrej Pavelec.

In last night’s shootout loss to the Islanders, I couldn’t help but notice the similarities between the two goals scored by the Islanders. Both Michael Grabner and Frans Nielsen, deked to the right (the goaltender’s left/glove side) putting the puck high over the shoulder of netminder Ondrej Pavelec. While Pavelec made many spectacular saves last night, keeping the Jets in a game they had no business being in, the Jets were eventually ousted in a skills competition shootout. 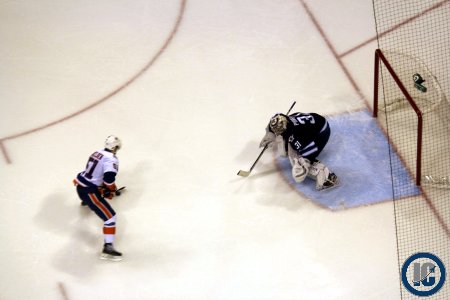 This season Winnipeg has a record of 1-2 in the shootout.  Of more concern, at least with respect this article, is the shaky play of Pavelec in the shootout. The Czech netminder has allowed four goals on seven shots for a save percentage of .429—small sample size, I know, but relevant nonetheless.

Throughout his career, the shootout has not been Pavelec’s strong suit.  He has an unimpressive record of 4 wins and 10 losses and has allowed 17 goals on 40 shots; that results in a save percentage of .575.  His .625 save percentage last season ranked 42nd among all NHL netminders.

Before further elaborating on the points above, it should be noted that while Pavelec’s shootout record this season is 1-2, he is certainly not the only player to blame.  In two of the team’s three shootouts, the Jets have failed to score a goal.  Obviously, it is difficult for any goaltender to record a win if the shooters are not scoring.

Of interest, however, is how opposing teams are attacking the Jets goaltender. Looking back at all of the shootout attempts against Pavelec this season a few patterns were apparent.

Being such a small sample size, it is difficult to say if this is a coincidence, or a trend, here is a summary of all of the shots against Pavelec:

All three shooters here tried the same move, no deke, just a shot over the left shoulder (shooters right, goalies left, glove side)

If I have begun to notice this, I would think that other teams may have a book on the Czech netminder.

Even if you hate the shootout, the reality is that it can determine playoff seeding. Last season the Thrashers were 5-7 in shootouts. This season the Jets’ record is 1-2; the team has scored two goals on seven shots and allowed four on seven. With 49 games remaining, the Jets are sure to encounter more shootouts. This team will have to show some improvement in order to increase their chances of making the playoffs.

Before the season began, I wrote the article “Who will shoot for the Winnipeg Jets?” I took a look at each player’s career shooting percentage as well as the goalies. This article has served as a good reference point for shootout knowledge.

Feel free to post your thoughts on the Jets shootout below.

The Jets and their opponents are capitalizing on back-to-back games
Game Day Preview: Canadiens @ Jets