We take a closer look at how the Jets have fared when playing teams who have played elsewhere and then had to fly to Winnipeg to play a back-to-back game. We will also examine how the Jets have done in these types of situations.

While not ideal, playing on back-to-back nights is part of the NHL schedule players have to experience. When talking to NHL players, they will never admit fatigue when playing on back-to-back nights; especially when it involves travel. Players will often give answers similar to, “we’re professional athletes, we’re supposed to be physically fit to play every day” and such.

After the Jets’ 5-3 win against Anaheim on Saturday, I noticed that the Jets have been able to capitalize on their opponent’s fatigue after back-to-back road games involving travel.

Below I will examine if this is indeed a trend so far this young season.

As of December 20, 2011, the Jets had played 16 home games. In four of those games, the team has faced opponents who were on the second night of back-to-back road games.

Here are the Jets’ opponents and their back-to-back games.

The Jets are 4-0 against opponents at home when the visiting team is on the second night of road back-to-back games. While the caliber of opponents may not be in the upper echelon of the league, it does include the thrilling, streak breaking victory against first place Boston on December 3. 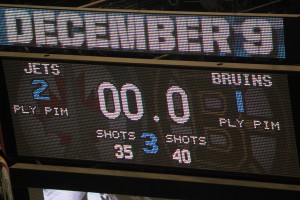 After looking at how Winnipeg has fared against visiting opponents on the second night of back-to-back games, I decided to take a look at the Jets’ results when playing back-to-back road games.

After examining the schedule, the Jets are 0-4 when playing back to back games. However, it is worth noting that they have faced a much higher quality of opponent in the second game of a back-to-back (DET, BOS, NYR are all top 4 in their respective conferences) than the teams who are coming into MTS Centre on the second night of a back to back.

Next time you hear a Jets player talk about their thoughts of playing back-to-back games, or playing against a team who is in their second game in two days, I wouldn’t take what they are saying too literally.  No player will ever say, “Oh yeah, I’m pretty tired we got in at 2 a.m. and I’m not looking forward to the game”.

The Jets will play their first back-to-back games this season at home on Thursday and Friday when they play Montreal and then Pittsburgh. From the small sample size collected, we can see that the odds will not be in the Jets’ favour.