The struggling Montreal Canadiens roll into town fresh from a loss last night in Chicago. The Jets are coming off a shootout loss here at home to the Islanders. Both teams need a win tonight. 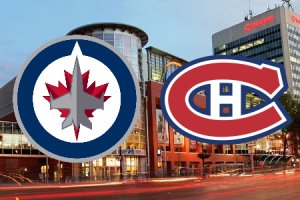 The Story: Nobody said it was the holidays just yet. The Winnipeg Jets have two home games coming up back-to-back before the NHL breaks for Christmas (December 24-25) starting tonight against the storied Montreal Canadiens and if they want to make any type of move up the Eastern Conference standings, they better not wait until the last minute.

The Jets are 2-1-1 on their current six game home stand but remain stuck in 10th place in the East, trailing the 8th place Ottawa Senators by a single point, with one game in hand. The Jets dropped their last game 3-2 to the New York Islanders in a shootout, and sit at a respectable 35 points after 33 games, which is not all that bad for a team that played 11 of its first 15 games of the season on the road, earning only five victories. The Jets are 6-2-1 in their last 9 homes games and have earned points in 11 of their last 15 games.

The Canadiens visit Winnipeg for the second time this season tonight (The Canadiens played the Jets in the regular season home opener, back on October 9th) and it couldn’t possibly be coming at a worse time for Montreal. After Wednesday night’s 5-1 loss to the Chicago Blackhawks, the Habs have now lost four games in a row and have only won three of their last 10 games. The Canadiens fired Head Coach Jacques Martin five days ago and replaced him with assistant coach Randy Cunneyworth, who has been blasted all week in the Quebec media for not speaking French. Instead of focusing solely on turning his team’s fortunes around, Cunneyworth has had to defend himself against attacks from critics who insist the coach of the Canadiens must speak both of Canada’s official languages. It culminated in a somewhat awkward statement from Habs GM Pierre Gauthier, who intimated that Cunneyworth was only appointed as interim head coach.

Tonight’s game will feature two of the most talented, and busy, goaltenders in the National Hockey League. Canadiens goaltender Carey Price has been simply excellent this year with a record of 12-11-7, a 2.40 goals against average and .914 save percentage in 30 starts. On the other side of the ice, Ondrej Pavelec will get the start for the Jets. Pavelec has a record of 11-11-5 with a 2.98 goals against average and .907 save percentage. It would come as no surprise to anyone if one or both of these goaltenders played a prominent role in tonight’s game.

The Jets starting line-up will remain relatively unchanged from Tuesday night. Here are the projected line combinations for the Jets for tonight’s game (subject to change closer to game time):

QUICKIES….Montreal Canadiens left winger Michael Cammalleri has struggled so far this season, scoring six goals in 30 games. Cammalleri had 39 goals in 2008’09 with the Calgary Flames…..Tobias Enstrom, in only his second game back from injury, led all Jets Skaters in ice time on Tuesday night versus the Islanders, logging 23 minutes and 50 seconds….. The Jets did not have a power play against the Islanders, which is only the second time this season that has happened. The other time? Back on November 6th, against the New York Islanders….. The Jets and Canadiens both have a team goal differential of minus-9…..Chris Thorburn is still looking for his first goal of this season. It’s 33 games and counting for the member of the G-S-T Line…..

Do opposing teams have the book on Pavelec in the shootout?
Jets game day post-practice audio