Folks in Chicago are happy to get Ladd back in the fold.

The Hawks kicked things off last night with this tweet they sent out to their fan base. 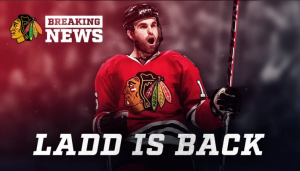 We heard from the Jets former captain as he spoke with Chicago media about the opportunity to play with the Hawks:

GM Stan Bowman met with the media to discuss what Andrew Ladd will bring to Chicago:

Blackhawks team historian Bob Verdi wrote about how Stan Bowman “Got his man“.

Even his new/old teammate captain chimed in:

Great to have you back in Chicago @aladd16!

Lastly the fans in Chicago were extremely happy that they got a piece that many feel will help them win their fourth Stanley Cup in the last seven years.