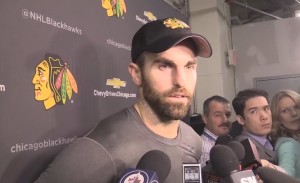 It was odd seeing former Jets captain Andrew Ladd in front of the Hawks backdrop wearing a Chicago hat but there he was following his new team’s skate at the MTS Centre this morning.  Following skate he was met with a considerable media presence and spoke about returning to the city and facing his former teammates.