The Calgary Flames’ 2008-2009 season can best be remembered for Roger Millions dropping a pejorative live on Sportsnet West while covering the Flames.  Unfortunately, fans do still vividly remember the Flames being ousted in the first round of the playoffs (for the fourth year in a row I might add).  That being said, significant changes have been made to right the ship, specifically with the acquisition of Jay Bouwmeester and the hiring of Brent Sutter to replace the fired Iron Mike Keenan.

Up front, Mike Cammalleri’s nose for the net will be greatly missed.  His 39 goals is one thing, but his ability to gel seamlessly on either of the top two lines, and play the point on the power play will be hard to replace.  Don’t worry, to fill the void the Flames signed Brian McGrattan and his 5 games played last season.  In all seriousness, the Flames will be looking for in-house promotions to replace Cammalleri’s production.  David Moss had a decent campaign potting 20 goals, as did Renee Bourque with 21.  Of course, the Flames still have big snipers in Iggy and Jokinen, so not to worry.  As always, Langkow provides a solid two-way game as an effective second line centre.  To review, the top two lines will likely be composed of:  Bourque, Jokinen, Iginla, and Boyd, Langkow, Moss.  Not a bad top 6 actually, only if Bourque and Moss can step up once again. 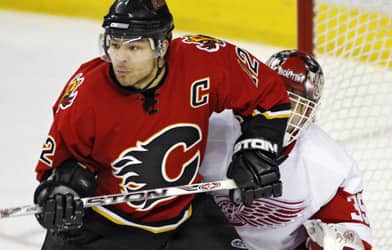 Can Iggy provide enough offense once again? (Photo from CBC.ca)

On the power play, look for Iggy and Olli to be front and centre, with either Moss or Bourque circling around to pop in some garbage.  Luckily with the Flames’ new acquisition on defence, Iggy probably won’t have to play the point on the PP.

Looking at the bottom six, a lot of energy and speed seems to be the theme; especially for Craig Conroy who seems to be on speed during every post-game interview.  Off-season, and former Coyote and Ranger players Nigel Dawes and Fredrik Sjostrom can both skate like the wind, and will fit in nicely on the penalty kill.  Dawes actually could be the x-factor here, as he has the potential to chip in offensively too.  Look for promising rookie and 2007 first rounder Mikael Backlund to get a crack and centering the fourth line, although he probably needs some good old fashioned seasoning in the AHL.  The bottom six will likely break down with Nystrom, Lundmark, Prust, and Dawes, Backlund, Van Der Gulik/McGratton/Jaffray/Brett Sutter/any other Sutter family member.

Here comes the fun part.  Who needs a good top four group when you have an amazing top three.  Phaneuf, Regehr, and Bouwmeester arguably make up the best top three in the entire NHL, and could all be playing for Team Canada come February.  Although Regehr isn’t lightning quick, he still possesses shutdown capabilities that dreams are made of and is the type of calming presence the Flames need on their blueline.  Phaneuf on the other hand is the antithesis

of Regehr, who often at times goes bonkers on the ice and runs around trying to hit his opponents, leading to him being caught out of position.  The former Norris Trophy finalist needs to have a bounce-back year if he wants to make Team Canada, and if the Flames are to advance past the first round.  Then we get to J-Bo.  The most anticipated free agent of the summer who never actually made it to free agent status, Bouwmeester will be counted on heavily.  The minute munching rearguard will be playing 30 plus minutes per night, seeing extensive power play and penalty killing duties.  Bouwmeester will probably improve on his 42 point numbers from last year.  There are still some key departures on the Flames’ blueline worth mentioning, as Leopold (part of the Bouwmeester deal), Rhett Warrener, Adrian Aucoin, and Jim Vandermeer are all gone.  No need to worry, as the Flames’ top three will surely TCB (take care of business) all season long.

The Flames motto the past several seasons has been “Win one for the Kipper”, as Kiprusoff has played a ridiculous amount of games.  Maybe this year he will sit out of the Olympics once again as he did in 2006 to “nurse injuries”.  If not, Kipper could get warn out once again when playoffs role around.  Even though Kipper did put up the most wins in the NHL, his save percentage and GAA were awful.  These should improve with the Bouwmeester acquisition, but Kipper needs to get some more time off.  Hello Curtis McElhinney.

Ceiling – the Flames can fill Cammalleri’s departed offense and get the first seed in the Northwest Division and finish 2nd in the West.

Floor – Phaneuf has another brutal campaign, Kipper tweaks his groin, and the Flames barely scrape into the playoffs by finishing 8th in the West.