Last season did not exactly go as Sabres fans may have hoped.  The team finished tenth in the Eastern Conference with 91 points (two points out of the final playoff spot behind the Canadiens) and clearly didn’t realize the expectations that Darcy Regier had of them.

So, are the Sabres on the verge of proving last year’s season was a fluke, or is this team going to miss the playoffs for the third consecutive season?  Let’s take a look.

The Sabres boast an impressive group of forwards.  Not only is the group loaded with skill, but the team’s core scoring forwards are still in the primes of their careers. 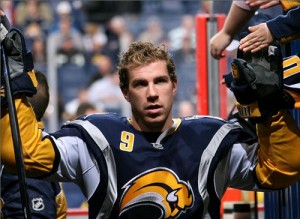 The Sabres are built around  the core of Derek Roy, Jason Pominville and Thomas Vanek.  In Roy, the Sabres have a multi-talented puck-handler, distributor and scorer.  He logged the most forward minutes on the team last season (21:11 minutes), won face-offs at a just over 50% and posted 70 points.  He played all 82 games and, in this writer’s opinion, is capable of posting a higher point total next season.

In Pominville, the Sabres have a good skating winger, with a terrific shot.  Unfortunately for Buffalo management, Pominville did not play well after signing his big-time contract before the 2008/09 season.  Pominville’s lack of offense last season still resulted in a 66 point season, so all was not lost.  Expect the sniper to rebound next season.

Thomas Vanek is the most talented player on the Sabres–and it isn’t even close.  He is big, strong, a great skater, puck-handler and shooter.  So, he basically has it all.  When he’s motivated and healthy, he is arguably one of the top five snipers in all of hockey.  With 40 goals in 73 games, Vanek could very easily crack 50 goals next season.

After those three, Buffalo still has a cast of a ton of talented players.  Tim Connolly is as skilled as there is when it comes to passing and finding holes, unfortunately he is extremely fragile and cannot be counted to play over 50 games in a season.

Connolly has great talent, and so does energetic winger Drew Stafford.  The former UND Sioux standout can skate, handle and see the ice very well.  He had a disappointing 2008/09 season, but he is capable of far more than his 45 point output.  The problem is getting Stafford signed.  He’s held out up until now but you have to think both sides will comes to their senses.

So, to say the Sabres have some depth at forward would be an understatement.  Never mind the fact that we still haven’t discussed the team’s two best offensive prospects–Nathan Gerbe and Tim Kennedy.  Some think Gerbe will find success in the NHL first, but both will eventually be stalwarts in Buffalo.

While the team’s defense has some promise, it doesn’t possess the depth or top-two defensemen that Sabres fans would like.  That being said, the organization is hoping that youngster Tyler Myers become a rock-solid top-two defenseman for the team for a long time to come.  In fact, the Sabres’ brass is hoping Myers makes the team this season. 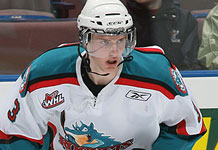 Myers aside, the team has defensive stalwarts Craig Rivet (34 years old) and Toni Lydman (31 years old) manning the blue line.  Lydman has been one of the more underrated defensive defenseman in the NHL for sometime.  Last season, he played 21:46 per game and led the team in short-handed ice-time.  Additionally, Lydman led the Sabres defense in both blocked shots (166) and hits (165) last season.  In Rivet, the Sabres have a defenseman who provides a little bit more offensive upside–he makes a solid first pass and can play on the power play, as well as strong leadership skills.  Rivet is the classic intangible defenseman and should feel more comfortable in his second season with Buffalo.

After Lydman and Rivet, the Sabres rely on of Henrik Tallinder, a defenseman with limited offensive talent, but an ability to kill penalties.  As well, Tallinder isn’t the most physical player but he relies on his positioning and size to do the job.  Along with Tallinder, the emerging Andrej Sekera will looked upon to improve on last season’s totals.  While he has offensive skill, his -11 +/- total was the worst on the team in terms of defensemen by -7.

Toss the young and talented Chris Butler, Nathan Paetsch and Steve Mondator and the Sabres may need be as bad on defense as you would think.  Granted, the loss of Jaroslav Spacek will hurt, but if Tyler Myers can come quick, that loss may not be felt past the 2009/10 season.

The Sabres have nothing to worry about in between the pipes.  Ryan Miller is the man to rely on for the foreseeable future, as he signed a long-term pact last season.  Miller posted a .918 save percentage in 2008/09, a 2.53 G.A.A., and five shutouts.  His save percentage was eighth in the NHL, so if the Sabres cut down on their shots against next season, expect Miller to post more shutouts and lower his G.A.A. 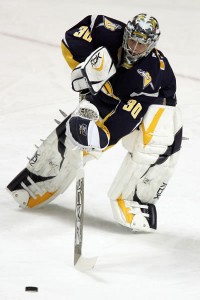 Backing up Miller will be veteran Patrick Lalime.  While he can’t handle the load of being number one, the 35 year old backup is known as a good backup who can fill-in when needed.  Granted, if the Sabres really liked Lalime’s game, they never would have traded for Mikael Tellqvist at the end of last season when Miller went down with injury.

Ceiling:  I’ll admit, I’m high on the Sabres’ talent.  This team has good coaching, as well; so factor in some improvement of the team’s core players and I would not be surprised to see Buffalo finish fifth or sixth in the Eastern Conference.

Floor: If the team takes too many games off, allows too many shots against, and doesn’t get the necessary production from its highest paid players, another season of finishing just out of the playoffs in the ninth, tenth or eleventh spot would be a likely result.

Although, I’m more convinced of the team’s ceiling capability than its floor.