The Philadelphia Daily News is reporting that:

The Flyers have fired coach John Stevens, the Daily News has learned.

An announcement is expected later this evening with a press conference to follow at the Wachovia Center.

No official word on a successor but indications are that assistant Craig Berube will take over on an interim basis.

However in terms of the next coach, TSN is reporting that:

TSN has learned that the Carolina Hurricanes have granted the Flyers permission to speak to Peter Laviolette, who is believed to be Stevens’ successor.

The signs have been there for the last few weeks that a change was going to be made in Philadelphia.  With all that talent, it was not acceptable that the team has done as poorly as it has, and currently sits outside the playoffs.

Perhaps they are hoping for a Penguins type change to take over this underachieving team.  The Penguins fired Michel Therrien when they were 2 games above .500 (27-25-5) and the Flyers fired Stevens also at 2 games over .500 (13-11-1).

Unlike the Penguins though, who promoted from within, it appears the Flyers will be giving current/former TSN analyst Peter Laviolette the opportunity to take the reigns in Philadelphia.  Can this Stanley Cup winning coach (Hurricanes in 2005-06) lead them to the promised land?

This team hasn’t won a Stanley Cup since 1975-75 and the expectations this season seem to be that nothing less that a Stanley Cup returning to the city of brotherly love, will be acceptable. 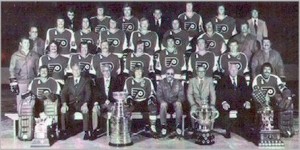 Update:  NHL.com is reporting that:

Laviolette will make his debut behind the Flyers’ bench on Saturday when the Flyers host the Washington Capitals. He’ll be joined by assistant coach Kevin McCarthy, an assistant under Paul Maurice in Carolina who had worked under Laviolette with the Hurricanes and was allowed to go to Philadelphia. 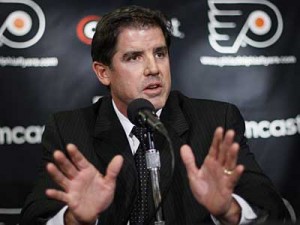 “I know this was a very difficult decision for Paul to make. And, I really feel bad for John because he’s been a terrific long-time member of our organization,” Comcast-Spectacor Chairman Ed Snider said in a statement. “I was hoping that the team would play better and that this could have been avoided, but after last night’s game, I think Paul felt he had to make this change. I make it a policy never to overrule my general manager, because once I do, it means I’ve lost confidence in him. I really want to wish John the best.”

Breaking News: Judge Baum rejects both bids for Coyotes!
Drama in the Desert: Synopsis of the COG meeting that took place last night to save Coyotes