Kane was scratched in his hometown. 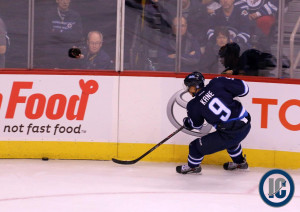 The Jets didn’t have a skate in Vancouver as they played the previous night in Calgary and coach Maurice in his pre-game comments prior to puck drop didn’t give any indication that he would be making any changes to his lineup.

However during the pre-game warm up it was noticed that Evander Kane, who is from Vancouver, was not on the ice.  The Jets twitter than tweeted out the lines, showing Byfuglien would be moving up to forward.

Paul Wiecek of the Winnipeg Free Press confirmed Kane sitting was a “coaches decision.”  This is the second time that coach Maurice has sat Kane as he held Evander out of a game in Toronto last season.  Of course if we learned anything the first time Kane was benched by Paul Maurice it is that we won’t learn anything.

This should prove to be interesting.

Following the game Brian Munz of TSN 1290 Winnipeg opened up the post-game scrum with a question about the Kane situation to which Maurice responded with “coach’s decision for him not to be in the lineup tonight”.  When Brian asked if he was leaving it at that Maurice followed up with “what do you think your chances of you getting more are?”.

Paul Wiecek of the Winnipeg Free Press asked if it was a more difficult decision based on the Jets need to win the game to which Maurice said “I’ve been doing this long enough that most most of these (decisions) aren’t that difficult to do.”