Breaking News: Perreault doesn’t have a fracture, will miss some games

Perreault is hurt but not out for long. 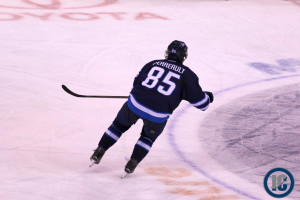 No pun was intended by our breaking news and in fact there is no break according to TVA Sports et Journal de Montréal reporter Renaud Lavoie this morning.

#jets Mathieu Perreault will miss some games after what happen last night. No bone fracture but he’s injured.

This comes as huge news for Jets fans who were very concerned that the team would be without the services of the stellar center turned winger on the team’s 2nd line.

If you missed it, Perreault was injured in the 2nd period of last night’s game when the Hawks Dan Carcillo took him out with a cheap shot.

Now the team won’t release anything until tomorrow as they have the day off.  Perreault was evaluated by team doctors this morning.

Update:  Tonight on Hockey Night in Canada Damien Cox said “the injury has not yet been disclosed but I can tell you it’s believed to be a torn ligament in his elbow”.

Update II (Sunday):  Coach Maurice indicated following the game day skate that Perreault would be out with an upper body injury.  According to Ed Tait of the Winnipeg Free Press coach Maurice indicated “Perreault is out tonight, likely the same for Columbus; hope to have him back after All-Star break” which is consistent with what was reported yesterday.

Update III (Sunday):  John Shannon of Sportsnet reported this morning that “Daniel Carcillo will appear in-person for his hearing on cross check to Jets’ Perreault”.

Update IV (Sunday):  Chicago Tribune reporter Chris Kuc reported today that “Daniel Carcillo is suspended pending his hearing with the NHL’s Department of Player Safety.”  Scott Powers of ESPN Chicago added “According to the CBA, a player subject to suspension may not play in a game pending the “in-person hearing and the League’s determination.”

Update V (Sunday):  Ed Tait of the Winnipeg Free Press is reporting that according to NHL Player Safety “Daniel Carcillo has waived his right to an in-person hearing. A phone hearing will be conducted”.

Again we should have something official following game day skate Sunday morning.  As always when we have more we will bring it to you via @illegalcurve and on site.