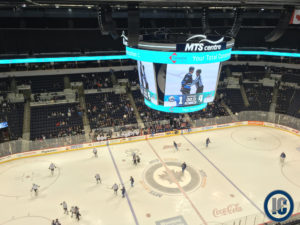 The AHL Jets took on the AHL Sharks tonight at the MTS Centre. I say “AHL Jets” since the Moose transformed for the evening, sporting the Manitoba Polar Bears moniker, along with elegant dark blue unis, lined with bright blue socks. While the apparel was quite charming, the results on the ice didn’t follow. In a game that left quite a bit to the imagination, the Moose were out-played, out-chanced, and out-classed by the Barracuda in a tepid affair in which the “Polar Bears” had just 26 shots, and perhaps 5 good scoring chances all night. Kyle Connor and Jack Roslovic played together for the first time on home ice, with the latter, Roslovic, perhaps the only stand-out skater on the home side. The only good news coming out of this game is that the Moose will have a chance to redeem themselves on Saturday night.

Barracuda Goal (1): a defensive blunder by Kevin Czuczman created a break for Sharks’ 2013, 1st round pick, Nikolay Goldobin, who made a nice deke and finished on the backhand.

Polar Bears Goal (1): Patrice Cormier threw a harmless wrister through the slot, but a great deflection by Quinton Howden evened the score at 1.

Barracuda Goal (2): Up a man, Barracuda d-man Patrick McNally took a slap shot from the point which deflected off Barclay Goodrow and past Eric Comrie.

Barracuda Goal (3): On another PP, Barracuda captain John McCarthy got a great back door feed from McNally and beat an unsuspecting Eric Comrie.

Barracuda Goal (3): On yet another PP, McCarthy snuck into the slot again, took a feed from Nikita Jevpalovs, and beat Comrie high blocker side.

Jack Roslovic: The second fastest skater at the AHL All-Star Game showed off his wheels tonight. Early in the first, he cut down the left side, burned the d-man and took it in all alone. Then he did the exact same thing again in the third, but again wasn’t able to beat Troy Groesnick. While Roslovic didn’t get on the scoresheet, you really can’t miss him when he’s out there. He just has too much skill and too much speed. A real treat to watch.

Brendan Lemieux: In Roslovic-like fashion, Lemieux showed some speed and desire in the middle frame, trucking his way down the left wing and cutting to the net for a great chance. After an early-season lull, Lemieux has picked up his game a bit, but he still has more to give.

Patrice Cormier: 3-1 down in the third, Cormier made was wide open in front of the net and made a great move to his left; he had the goaltender grounded and at his mercy, but when he went to shoot, the Sharks’ goaltender miraculously got his stick on the shot.