The Moose mounted a 3rd period comeback but couldn’t complete it and fell to the Barracuda. 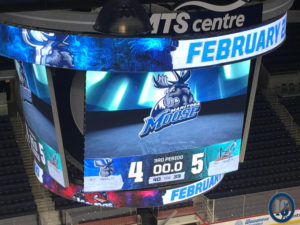 I was up in the booth providing colour commentary for tonight’s Moose game along with play by play voice Mitch Peacock so I was unable to record the events in the same manner as usual.

The big news of the day came out just prior to warm up as Eric Comrie who was scheduled to make his eighth straight start for the Moose was pulled.  He had suffered a lower body injury when he had a Barracuda player collide with him in the 1st period of Friday night’s game.  This meant that 2012 7th rounder Jamie Phillips would get the start.  The Moose also had to sign a local (Murray Cobb) to an ATO to act as Phillips backup.

Manitoba got off to a quick start against the second best team in the Pacific with Peter Stoykewych blasting home a power play goal.  However you cannot keep a good team down for long and San Jose first took a 2-1 lead after 20 which they extended to 4-1 after 40.  The Moose bent but did not break as Jamie Phillips made some saves to keep it a three goal affair.  While it may seem inconsequential Manitoba on the strenth of two Kyle Connor goals (his seventh and eighth of the season) climbed within one.  What had seemed improbable just a few moments earlier was suddenly a very real possibility.   The Barracuda added an empty net goal which looked like it might seal the deal but Quinton Howden buried a chance to bring Manitoba within one.  Manitoba did have some control but time ran out before they could really attempt to tie the game and the visitors left the MTS Centre with another victory.

The Moose will now head out next week for a six game road trip which begins on February 7th in Grand Rapids, Michigan.

“It felt good to get in there.” – Jamie Phillips reflects on making his AHL debut tonight vs. San Jose. #GoMooseGo pic.twitter.com/byDpv9aXBL