A look at the Michigan product lighting the lamp in 2018-19. 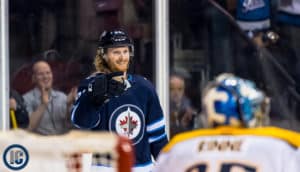 He really seemed to discover his game in the American Hockey League when Winnipeg assigned him to the Manitoba Moose for the 2016-17 season after he started the season with the big club.  That year included 25 goals in 52 games, 17 of which came in the last 20 games, including his first hat trick as a pro.

The 2018-19 campaign also included his first NHL hat trick which was the 20th one for the organization.

Similar to the situation with Patrik Laine, folks in the province are currently waiting for the restricted free agent to come to terms with the local NHL club so while you wait you may as well enjoy his 34 goals from last season.  Here you go: