After Nikolaj Ehlers scored 29 times during the 2017-18 campaign he was limited to 21 goals last season after he missed 20 games due to injury in 2018-19. But as you can see below there is a reason they call him the Dynamic Dane because his skating, his ability to get open and his laser beam shot contributed to him being one of the best goal scorers on the Winnipeg Jets. 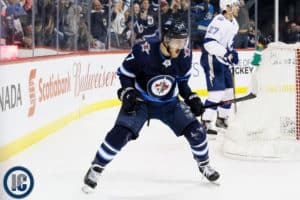 He has 90 goals in 298 games for Winnipeg since he turned pro back in 2015-16. The Jets 1st rounder in 2014 ranks second on the team in terms of hat tricks with four total (trailing his buddy Patrik Laine who has seven) and notably had the first away hat trick for the Jets 2.0 (back in 2017 against the Oilers in Edmonton).  He had two tricks last season including that unusual one against the Sharks where he got hauled down on the breakaway and was awarded a goal which was his third one of the game.

Provided he is healthy there is no reason he shouldn’t be a 30+ goal scorer for Winnipeg next season. For now enjoy the 21 he scored last year: