In 2018-19 Jets sniper Patrik Laine lit the lamp 30 times.  While 30 was a big decrease from the 44 he scored the previous season it still gave the phenom from Finland 110 goals in 237 games after his first three seasons in the NHL.  One of the 30 goals he scored was his 100th career NHL goal as he became the fourth youngest to achieve that feat behind Gretzky, Carson and Bellows. 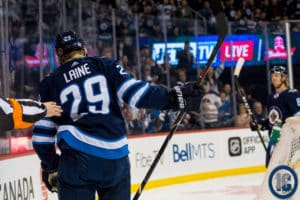 This included a remarkable 18 goals in 12 games during the month of November.  He continues to dominate the Jets hat trick ranks as he picked up another three last season (including his famous five goal game against the Blues which won one lucky local fan a million dollars).  He now has seven of the 20 hat tricks since relocation to Winnipeg (the next closest player is Nikolaj Ehlers with four).

Of course folks in the province are currently waiting for the restricted free agent to come to terms with the local NHL club so while you wait you may as well enjoy his 30 goals from last season.  Here you go: