Post-game from Jets players as well as from Coach Maurice following game 3 of their play-in series. 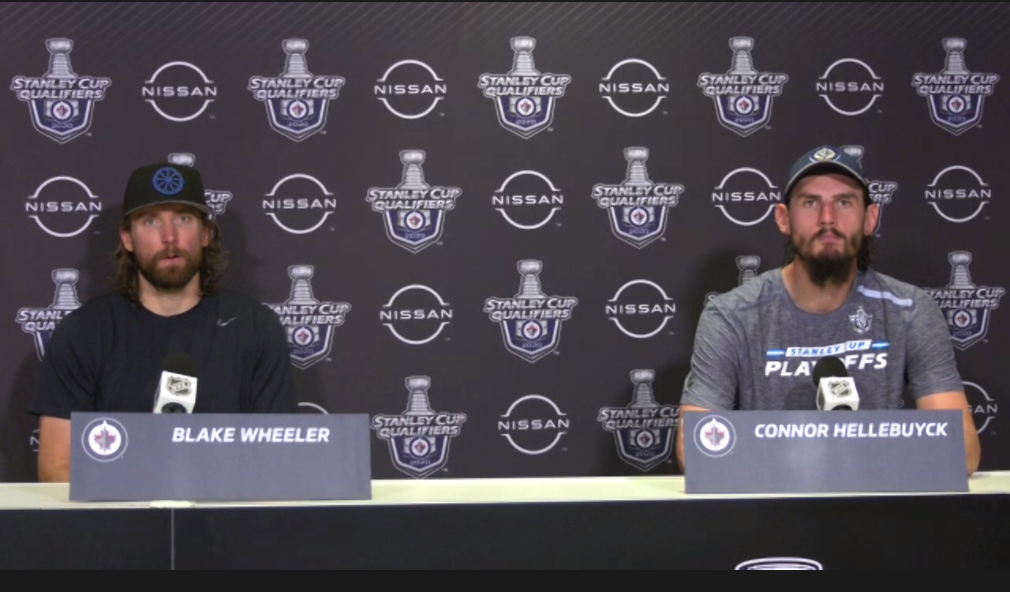 The Jets opened the scoring, but it was all downhill from there for the team from Winnipeg.  The middle frame was not kind to the home side as the Flames would score three times in the 2nd period as they won the special teams battle and go on to win game 3 by a 6-2 margin.

– For the third straight game the Jets opened the scoring;
– Nikolaj Ehlers turned a drought to a goal streak with his second in as many games;
– Tucker Poolman was lost in the 2nd when he blocked a shot with his face;
– Mathieu Perreault was hit by Sam Bennett in the 2nd and didn’t return (aside from testing his leg to start the 3rd);
– Blake Wheeler & Kyle Connor both with a single assist in 3 games;
– Flames went 3/4 on their power play;
– Jets have given up 10 goals in the 2nd period through three games.

After leaving the game in the middle frame Tucker Poolman managed to return in the 3rd period although coach Maurice said in his post-game availability that he was lucky he didn’t lose any teeth.  The Jets bench boss didn’t have an update on Mathieu Perreault, who also left in the 2nd after this hit, and tried to return to start the 3rd but immediately went back down the tunnel

1. What was the difference between today and yesterday? (Wheeler)
2. What kind of mentality do they need for the next game? (Wheeler)
3. On the second goal against, what happened? (Hellebuyck)
4. The Flames aggressiveness to coming to his net? (Hellebuyck)
5. What is it going to take to get things going offensively for him and Kyle Connor? (Wheeler)
6. To what does he attribute his ability to bounce back after a loss?  (Hellebuyck)

1. The play of the Jets in games 1 and 3?
2. The lapses the Jets are having in the middle frame?
3. How would he assess Connor Hellebuyck’s play?
4. Status of Tucker Poolman and Mathieu Perreault?
5. What is it going to take to get Blake Wheeler and Kyle Connor going offensively?
6. Dealing with adversity and being on the brink of elimination?
7. Is there something the Flames are doing to neutralize Kyle Connor?
8. Does this game 3 loss feel like Déjà vu from the game 1 loss?
9. Is there a concern with Connor Hellebuyck’s puck handling behind the net?

The Jets are scheduled to be back on the ice on Wednesday as they prepare for game 4 on Thursday.  You can kick start your Wednesday with the AM Jets papers which go live at 7 am on illegalcurve.com.