With the release of the Winnipeg Jets jerseys last week, the checklist of items that True North Sports and Entertainment have been working on since May 31, 2011 is slowly beginning to come to an end. Sure paint needs to still be applied in areas of the MTS Centre, and sure everyone is champing at the bit to actually receive their season tickets in hand, but the marathon of a summer faced (admirably) by everyone at True North is slowly giving way to the relative monotony of day to day activities.

When Andrew Ladd, Mark Stuart, Eric Fehr and Nik Antropov stepped off the Hercules plane at 17 Wing Air Force Base in Winnipeg, and unveiled the jerseys to be worn by the Winnipeg Jets 2.0, the last remaining aesthetic question had been answered, and the attention/obsession of Winnipeg Jets fans can now be squarely focused towards the on ice product being put forth this coming NHL season and the machinations surrounding Zach Bogosian’s contract status. 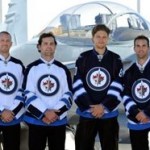 With the sharp navy colour scheme as the home jersey (sorry, I refuse to call it polar night blue), and the road jersey being the classic, traditional white jersey, the team will certainly look good on the ice, regardless of the talent level being put forth. While I don’t believe this will be an issue this season, the question that is sure to arise when the team is of a playoff caliber, is what will become of the legendary, often imitated, never duplicated, Winnipeg White-Out? 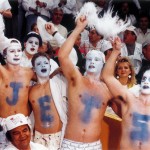 More on this after the jump.

Ever since 2003 when the NHL switched the colour scheme, and decided the home team would wear dark coloured jerseys, the playoff white-out has been left in limbo. In some cities fans still wear white to support the home team, even if that same team happens to be clad in dark jerseys. In other cities, they have adjusted to the times and have started wearing the darker colour jersey being sported by the home team. The “Red Mile” in Calgary is a great example of fans adapting. In Winnipeg though, where the white-out is sacred and violating it may be punishable by biblical-era stoning, will Winnipeg Jets fans be willing to accept the difference between the whites worn in the stands and that of their on ice heroes?

The answer to the question as to why the home team ever adopted dark jerseys in the first place comes down to a familiar answer, money. New home jerseys mean new jersey purchases mean new revenue. For some of the cash starved NHL franchises, that’s no small matter. Same reason why 3rd jerseys ever came on to the scene—teams saw another potential avenue for generating revenue. Unfortunately, where seeing the dark jerseys was once unique and “fun” for the home fans, like every other flash in the pan idea, it has fallen by the wayside, and now only results in the awkward white-out related dilemma teams are currently faced with.

There’s an easy solution to the white-out, dark jersey problem. Yet, because it will demand that the NHL is moderately fan friendly it probably will never see the light of day. Simply put, and I refuse to believe this is too burdensome of an inconvenience for a visiting franchise, the home team should be allowed to wear whatever colour jersey they want to wear—dark, light, or alternate. Given the amount of luggage already hauled by the visiting NHL team, how much of an inconvenience is one more set of jerseys? With this solution, the fans of a particular team who are fortunate enough to attend multiple games per season, will see their team play in any and all of their available jerseys. Maybe the Winnipeg Jets will have a tremendous record while wearing their dark jerseys at home, and the white out will naturally morph into a black out? The point is that for a league that is always trying to stand out and not be the ugly stepchild of professional team sports, they need to do everything in their power to become as fan friendly as possible. Given the void that will be in the sporting marketplace with the NBA heading toward nuclear Armageddon over their collective bargaining agreement, the NHL would be wise to position themselves as THE fan friendly sport, and reap the rewards that doing so would bring them.

If being more fan friendly means I have to stand at the MTS Centre clad entirely in Polar Night Blue because the Jets are more comfortable in their darker jerseys come playoff time, I’m confident I will stand and cheer just as loud as I did when I was clad entirely in white. If foregoing the white out is the cost of a trip deep into the NHL playoffs, which as every Jets fan will tell you is their white whale, that’s a price I would be willing to pay. For the Jets 2.0, I would prefer to have actual victories on ice, as opposed to the paper victories the Jets 1.0 were forced to “celebrate”.