With the NCAA cancelling winter championships what might be next for Winnipeg Jets draft pick Dylan Samberg?

All eyes are on Jets 2017 2nd rounder Dylan Samberg.

At the 2017 NHL Draft in Chicago, the Jets called out the name of defenceman Dylan Samberg of Hermantown, Minnesota in the 2nd round (43rd overall).  Since that time the left shooting defenceman has won two straight national championships with the University of Minnesota-Duluth and was seeking a third straight title this season with his Bulldog teammates. 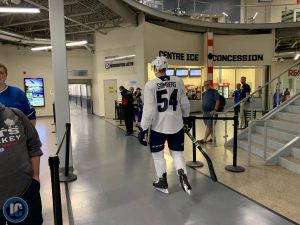 We have spent quite a bit of time talking about Samberg over the years as some were hoping he would turn pro last summer but instead he chose to chase the rare Frozen Four three-peat which has only been accomplished once before by Michigan back in 1951, 1952 and 1953.

With the events of this last week the NCAA announced they were cancelling all winter championships which would appear to open the door for the Jets to sign Samberg. 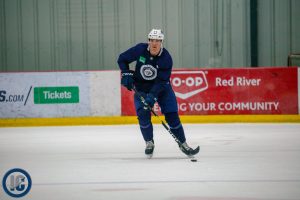 On Saturday’s Illegal Curve Hockey Show we spoke to Tom Lynn, who is the former assistant general manger of the Minnesota Wild and is presently a principal/player agent with Veritas Hockey.  This is what he had to say about about college age players and signing in the current climate (Samberg was mentioned in the question):

“Technically they can and some of them may start doing that.  I have not undertaken that line with players we advise now.  I am not letting anyone who has eligibility left and potential games hire us as an agent, which would kill their eligibility, until at least next week.  I told them ‘You know what let this play out.  You never know what’s going to happen.  This was a real, panic’s probably too strong a word, but it was a really quick decision that NCAA made and it’s not going to hurt anyone if we wait ’til Monday, Tuesday or Wednesday of next week to try to see what’s happening for those teams that still would have been playing.’  Especially Duluth was looking at a historic run to the championship game.  Had they made it they would have been the first team in history to ever make it four years in a row and Samberg would have been a part of that.  So patience can be counseled for those guys.

For those who are done, the only difference for them is they can’t burn a year as you’ve seen players do in the past with a few games left in the NHL season.  I don’t think that’s a huge issue.  I think that’s probably overblown for the most part every year because it sounds exciting but it’s an issue.”

Some Jets fans are worried that Samberg could opt to choose free agency (which wouldn’t be an option until after the conclusion of his senior or fourth college season) on August 15th, 2021.

For those concerned you should read Scott Billeck’s piece in the Winnipeg Sun from last month which spoke about Samberg chasing history first, Jets dream next.

A number of college players signed on March 10th after their seasons ended but before the NCAA announced the cancellation of championships on March 12th.  On Friday, March 13th Scott Powers and Mark Lazerus of The Athletic Chicago wrote a piece entitled ‘What we’re hearing about the Blackhawks in the wake of the suspended NHL season‘ and in it they referenced this about two Chicago draft picks playing in the NCAA:

The Blackhawks may give it a few days, but they’ll likely soon reach out to prospects Ian Mitchell and Evan Barratt to discuss their futures. Both players were destined for the NCAA tournament with their respective teams (Mitchell with Denver and Barratt with Penn State) and had their seasons cut short with the NCAA’s decision to cancel all winter championships on Thursday.

Have to suspect Winnipeg would also be checking in with Samberg’s camp this week.

When we hear more or if there is a signing to report we will have it on site.