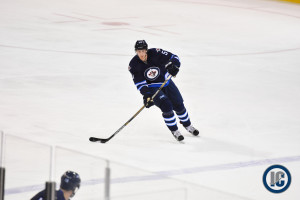 Defenceman Tyler Myers wasn’t on the ice for today’s warm-up skate as the Jets got set to take on his former team the Buffalo Sabres.  The Jets announced he won’t be in the game as he is dealing with a lower-body injury.  This means Myers and Stafford both will be out of the lineup against their former club.  Just Bogosian and Armia will play.

We will likely get an update from coach Maurice as to the status of Myers following the game.

Update:  Coach Maurice indicated that Myers was “day to day, lower-body”. Said it was something that happened during the Colorado game on Friday night.