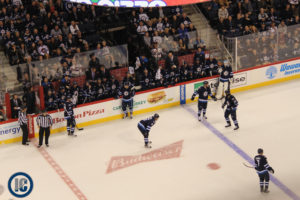 The Jets dropped the game 3-1 to the visiting Sabres.  Head into the room to hear from Nikolaj Ehlers, Patrik Laine and Michael Hutchinson:

Nikolaj Ehlers:  On what he needs to do better.  If he knew they would have taken two of three games in this stretch would he be happy?  Case of the puck not going in, squeezing the stick, hot goalie?  Getting back onto the line with Wheeler and Scheifele.  Assessing the first nine games of the Jets season.  How close was he to batting that puck out of the air?  Does he practice that skill?

Patrik Laine:  Frustrating game?  Slow start.  Does it mess up the routine playing an afternoon game?  Does he notice opposing teams are playing him tighter?  Is he finding there is less room on the ice?  Getting a chance to face Alexander Ovechkin.

Michael Hutchinson:  On the third goal against.  Does he think he got pulled to get the team momentum?  How does he feel about the rotation and the goaltending overall?  Does he expect the rotation to continue?  Did he feel fresh coming into the game? What did he see in that second goal?