Another day of Jets training camp

Today’s division of groups saw the AHL/Junior guys skate in Group 1 in the morning while the more NHL Group 2 skated at 12 noon. 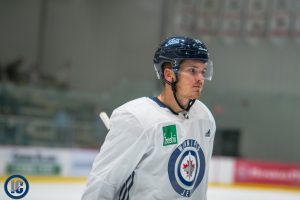 According to Jamie Thomas of Jets TV, Group 2 was missing Wheeler and Little and he indicated that Niku left the ice early.  Here is how the forward lines and D pairs set up according to Jamie (obviously prior to Niku departing the ice):

Bryan Little scrum:  Said he spoke with Laine two or three days ago.  Said he knows Laine well enough to know he wouldn’t criticize his teammate like that. Joked that he understands about wanting to play with the best players (said everyone wants to play with Wheeler & Scheifele, and Little included himself in that list of players). Said he didn’t need the call but it confirmed to him Laine is a “great guy” and it was nice to chat with him.

On guys trying to hit him and his ability to spin away from it: “Sometimes it’s fun but sometimes it’s not when they hit you and then it’s not fun but usually it is.” You can sense the fun he’s having when he mentions being hit.

Coach Maurice:  How much video does he watch from a pre-season game?  Did he know about the conversation between Laine and Little?  On the way that Bryan Little handled the situation.  On the Jets adding centre depth.  Has he ever had a training camp where he’s had to discuss as much off ice noise?  What has he liked about Tucker Poolman?  On Poolman fighting with his history.  Injury updates.  Hellebuyck tomorrow?  Thoughts on Sami Niku.  On Mikhail Berdin being an interesting prospect.

Connor Hellebuyck will get his first start of the pre-season according to coach Maurice when he faces the defending Stanley Cup champion Blues tomorrow night in Winnipeg.