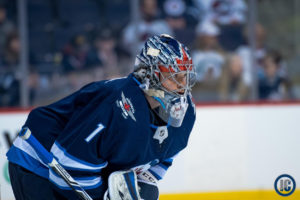 The Jets selected Eric Comrie back in the 2nd round of the 2013 NHL Draft in New Jersey.  While in junior he played a few games for the Jets AHL affiliate in St. John’s and eventually turned pro in the 2015-16 season playing 46 games in his rookie season for the Manitoba Moose franchise which was newly returned to Winnipeg.  He just completed his fourth straight year as the primary netminder in goal for the Moose.

It should be an interesting year for the California kid with Edmonton roots as he is no longer waiver exempt.  In addition Mikhail Berdin the Jets 2016 6th round pick, who is fresh off his rookie campaign, is sure to push for games this season in the net for the Jets AHL affiliate.

Over in Belleville at the Jets prospects tournament spoke about the deal for his top goalie in the AHL:

For those who cannot watch the video here are some of coach Vincent’s comments:

“I am really happy. He’s an outstanding human being. Great guy around the room. And I am really excited for him.”

“I think he’s grown a lot and he’s a good player. He’s really fast. He’s very intense. He can read the play well. Where he was a few years ago and where he is now, he’s been improving but it’s all out of hard work.”

“Once he’s gonna have that real opportunity (in the NHL) I think he’s going to take it and run with it. For him its all about making sure that’s he ready to stay once he has that chance.”