The first of the Jets targeted free agents was signed by the team as Grant Clitsome’s agent tweeted the news that the Ottawa native will be sighting with Winnipeg for three years including financial details. 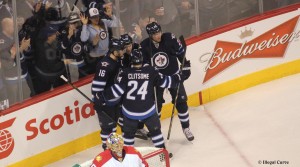 Jets fans got quite a bit of news on Tuesday.  After the release of the Jets exhibition schedule and informing fans they had extended qualifying offers to 13 players.

Just when it looked like that would be it, Grant Clitsome’s agent tweeted the news that the Ottawa native will be signing with Winnipeg for three years including financial details.

This was followed by Grant Clitsome tweeting his excitement about sticking around in the Peg’.

This was then confirmed by Senior Director, Corporate Communications for NHL’s Winnipeg Jets Scott Brown:

So one down and many, many to go.  Are you as a Jets fan excited to see the always happy Grant Clitsome returning to the roster for the next three seasons?

There will be a teleconference with Clitsome at 9 am cst which @illegalcurve will cover and then we will have details of same on the site.  GM Cheveldayoff will be speaking at 9:30 am cst also via teleconference.