National Post:  Grading the Canadian teams.  If you were feeling any angst over the Jets picks they received an A+ in this assessment.

– the Winnipeg Sun’s Ken Wiebe reported that former Jets prospect Zach Yuen will be heading off to Dallas Stars prospect camp.  He was not offered a deal by Winnipeg and wasn’t picked up during Sunday’s draft in New Jersey by any other teams.

Winnipeg Sun:  Jets lock up defenceman Grant Clitsome for three years.  The always smiling Grant Clitsome is a big fan of this city and now has three more years to enjoy his time here.  There will be a conference call tomorrow at 9 am so stay tuned to IC on twitter (@illegalcurve) as we will be covering it as well as GM Cheveldayoff’s presser which will begin at 9:30 am.

Winnipeg Free Press:  MTS Centre to host Baizley memorial service.  He was a legend in this city and it is only appropriate that he is given a proper send off.  At the draft Commissioner Gary Bettman took a moment at the start to give Baizley his due and express the loss the league feels with his passing. 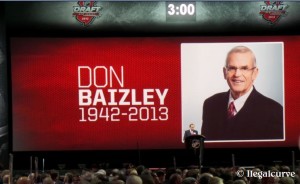 Illegal Curve:  Jets release 2013-14 exhibition schedule.  Hope Jets fans plan on bringing me a birthday present as the first exhibition game coincides with my bday.  Check out the schedule.  Which games you planning on attending?

USA Today:  Glendale approves deal that will keep Coyotes in town.    Is this the end of the drama in the desert?  The NHL still needs to approve the purchase.  If this does in fact ensure the survival of the Coyotes, will fans who have been on the fence with support, get onto the bandwagon in sufficient numbers to justify saving the team?

Winnipeg Sun:  For his love of the game.  The Pass it Forward charity is a great effort in this city which helps young, disadvantaged kids play hockey.