There appears to be a lot of misinformation (shocking) as to when and how Winnipeg Jets Season ticket holders will be receiving their tickets from the Jets.  So I called True North today as my season ticket group was also asking me for the details. 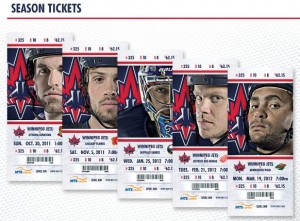 I was told that the tickets will be delivered in two phases.  Phase 1 is the exhibition games sometime in September and phase 2 will be the entire regular season package towards the end of September.

More on the means of receiving your season tickets after the jump.

I was informed that they are still working out the exact delivery method (whether you will be asked to pick up the tickets at the MTS Centre or whether they will be mailed out.

The gentleman explained that an email will be going out early next week (following the long weekend) with all the details.  So fear not Jets season ticket holders, while you might not have physical control over your tickets just yet, they should be in hand quite soon.