A look at what the 2nd overall pick has been able to accomplish in his first 14 games. 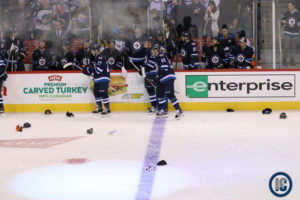 When Jets (super) rookie Patrik Laine scored his third goal of the game last night I checked his goal scoring pace against that of his countryman Teemu Selanne’s pace from 1992-93 and lo and behold I discovered they were on the exact same pace:

For those keeping track at home:

Apparently some folks liked that comparison.

Selanne had a total of five hat tricks during his rookie season (including a four goal affair) however Laine has already managed to get his first two hat tricks in his first 14 games (Took Selanne until game 27 to get his second hat trick).  Also worth noting is that Laine is 18 while Selanne was 22 at the time they were both rookies (Teemu had the obligation of joining the Finnish Army).  Something else to consider is that these are two very different eras in which they played/are playing.

Following the game (you can hear entire scrum here) I spoke with the Jets rookie about keeping pace with Selanne’s goal total:

I asked Patrik Laine after the game about being on same pace as his countryman Teemu Selanne (11 goals in 14 games). #NHLJets @IllegalCurve pic.twitter.com/EDDye2Hc7j

Worth noting that Patrik Laine now leads the NHL in scoring with 11 goals and has the most points of any rookie with 15 (three more than Toronto’s William Nylander who has 12 in 13 games). His shooting percentage is a lights out 25%.

Some other interesting notes via Elias Sports Bureau:

With the start to the 2016-17 season for Patrik Laine I just hope Lids has some good sales on hats because at this pace Winnipeggers are going to need it.

Tomorrow’s Illegal Curve Hockey Show is going to be a gooder as we will be all over the first two days of #NHLJets training camp!

- intensity of scrimmage
- questions he is getting in drills
- learning about his new team
- Ville Heinola
- veteran status/contract
- team building.